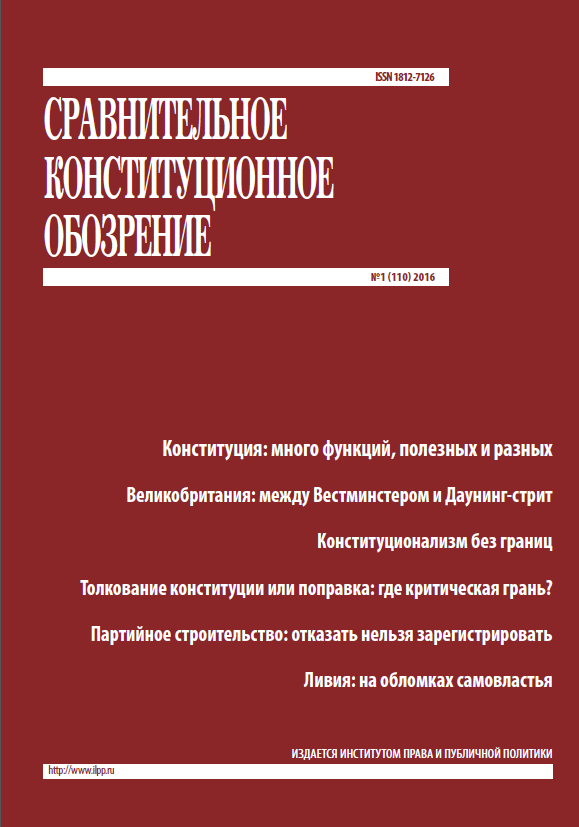 THE ACTUAL PROBLEMS OF MODELING THE CONSTITUTIONAL ARCHITECTURE OF LIBYA

The article analyzes problems of modeling of the constitutional system in Libya through the prism of constitutional values throughout a continuous transformation of the Libyan state between declaring of independence in 1951 and the present time. The author claims that the revolutionary events that took place in Libya in 2011, idea of overthrowing the Gaddhafi regime, reinforced and exacerbated social, economic and political problems, provoked an explosion of separatism, social and political divisions.

THE BRITISH PARLIAMENT AND THE EXECUTIVE POWER

FUNCTIONS OF THE CONSTITUTION

The functions of constitutions have for the long time been in the focus of attention of researchers and politicians. In this paper the author draws an important distinction between legal functions and some meta-legal functions – such as state – and nation shaping, identity preservation of the political community and integration. In the same time the article shows the very subtle character of differences between these functions and their capacity to transform from one form to another.

INTERPRETATIONS OF THE CONSTITUTION AS ITS ACTUAL AMENDMENTS

IN RETROSPECT: LOOKING IN THE HISTORY

THE ORIGIN OF THE COMMUNIST REGIME: FROM “REPUBLIC OF SOVIETS” TO THE ONE-PARTY DICTATORSHIP. PART 2

The origin of the Communist regime remains the focus of acute debates not only for historians, but also for politicians and legal experts in the context of Soviet legacy and the formation of the transitional Post-Communist regime. The widespread myth about Soviets as integral institutes of direct democracy still inspires leftist ideological proposals and even has significant impact upon constitutional amendments to Russian Constitution of today. The author analyses the place of Soviets as traditionally motivated institutes in the political structure of the Bolshevist regime, their impact on radical transformation of political culture, electoral system and local self-government organization.

STATE REGISTRATION OF POLITICAL PARTIES AND THEIR REGIONAL OFFICES: ANALYSIS OF JUDICIAL PRACTICE

THE MAKING OF QUALITY LAWS: REQUIREMENTS TO THE LAW DRAFTS

Obviously that it is necessary to provide high quality bill to the State Duma, that will be able to pass successfully legislative process at all stages of the, and effectively regulate social relations in practice. One of the most important ways to improve the quality of bills is to comply with certain requirements in their drafting.

The review summarizes and comments on some of the most interesting theses from the book written by the German Orientalist and political writer Michael Lüders “Wer den Wind sät: Was westliche Politik im Orient anrichtet”. As the very title of the book suggests, this pamphlet discusses the impact of the West and Western policies on the political, social and economic development of the Middle East which, according to the German author's pen, was quite negative if not even destructive. The book, though, as the review's author stresses, was a big success in Germany, with six-figure circulation of 16 printings.

REVIEW OF JUDGEMENTS OF THE RUSSIAN CONSTITUTIONAL COURT: DECEMBER • 2015