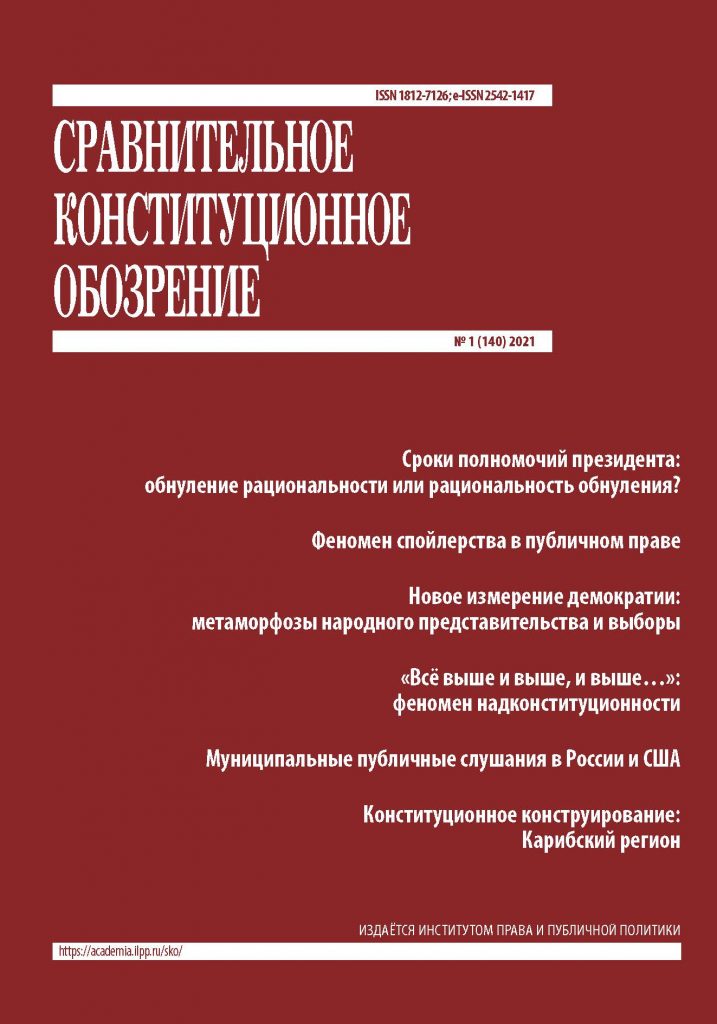 THE CONCEPT OF TYPES OF POPULAR REPRESENTATION

Democracy has many appearances. The principle of democracy is implemented in republics as well as monarchies, unitary states and federations. This article proposes a new dimension of democracy — the type of popular representation — which depends on the electoral system used in national parliamentary elections. The ownership of power in the state by the people is ensured by the functioning of a representative body elected by citizens and having exclusive authority to pass laws that are binding on all. In addition, the parliament participates in the formation of bodies of other branches of power and approves the budget. Thus, research into the manifestations of the institution of popular representation is important not only for countries with a parliamentary government, but also for all other states. The direct dependence of the composition of the legislature on the will of the people guarantees that the actions of the state are subordinated to the interests of this entity.

SPOILERS AS A FORM OF ABUSE OF POWER

In the article the author specifies some general theoretical approaches to the concept of abuse of power, which were outlined by him earlier in his article «Abuse of Rights and Abuse of Power: To the Formation of a Unified Doctrine» published in one of the issues of this journal. The main part of the article discusses possible illustrations of spoilers in the following areas of legal relations: the organization of public assemblies (including in single specially designated places), participation in public hearings (in particular, on the adoption and amendment of land use rules), initiation of a federal referendum (namely, challenging the decision of the election commission to register a regional subgroup of the initiative group).

Currently, public hearings are one of the most widespread forms of deliberative municipal democracy in Russia. This high level of demand, combined with critique of legal regulations and the practices for bringing this system to reality — justified, in the meantime, by its development (for example, by the Agency for Strategic Initiatives and the Public Chambers of the Russian Federation) of proposals for the correction of corresponding elements of the legal code — make both the study of Russian experiences in this sphere and comparative studies of legal regulations and practical usage of public hearings in Russia and abroad extremely relevant. This article is an attempt to make a contribution to this field of scientific study. If the appearance of public hearings in Russia as an institution of Russian municipal law is connected with the passing of the Federal Law of 6 October 2003 No.131-FZ, “On the general organisational principles of local government in the Russian Federation,” then in the United States, this institution has existed since the beginning of the 20th century, with mass adoption beginning in the 1960s. In this time, the United States has accumulated significant practical experience in the use of public hearings and their legal formulation. Both countries are large federal states, with their own regional specifics and diversity, the presence of three levels of public authority and different principles of federalism, which cause differences in the legal regulation of municipal public hearings. For this reason, this article undertakes a comparative legal analysis of Russian and American experiences of legal regulation and practical use of public hearings, on the example of several major municipalities — the cities of Novosibirsk, Nizhny Novgorod, Voronezh and New York, Los Angeles, and Chicago.

SELECTIVE RATIONALITY? ARGUMENTATION OF THE CONSTITUTIONAL COURT OF THE RUSSIAN FEDERATION ON THE TERMS OF OFFICE OF THE PRESIDENT IN THE MIRROR OF COGNITIVE SCIENCE

The Decision (Zaklyuchenie) of the Constitutional Court of the Russian Federation on the constitutionality of the constitutional amendments played a significant role for the entry into force of the amendments to the Constitution of the Russian Federation adopted in 2020. For this reason, and in connection with the fact that many of the novels raise questions precisely from the point of view of their compliance with Chapters 1, 2 and 9 of the Russian Constitution, the positions formulated in the Decision attract serious attention. The article analyzes the arguments of the Court on one of the significant innovations — the possibility of being elected to the post of President of Russia by a person who held or holds this position at the time the amendment entered into force, without taking into account the previous terms.

PERSISTENCE IN CHANGES: ON THE TRUE CAUSES OF THE IRRESISTIBLE ATTRACTION OF THE CONSTITUTIONS OF EXOTIC COUNTRIES

In the great international literature on comparative constitutional law, main theoretical observations and constructions normally been made on the ground of principle Western models interpretation. That is quite natural because the experience of established democracies in their historical and political implications formed the basis and resource of inspiration for many new nations looking forward to create the similar forms of constitutional government in spite of various cultural and social difficulties. But this approach substitute the problem by its ideal solution sometimes ignoring the whole bulk of emotions, hesitations, exaggerated hops, disappointments and interests, which are represented in regions and countries of so-called “periphery zone” of legal development acutely pressed to search their own strategy of constitutional modernization in quite different cultural and political context. This problem becomes the central point in the monumental work under review: “The Oxford handbook of Caribbean Constitutions”.