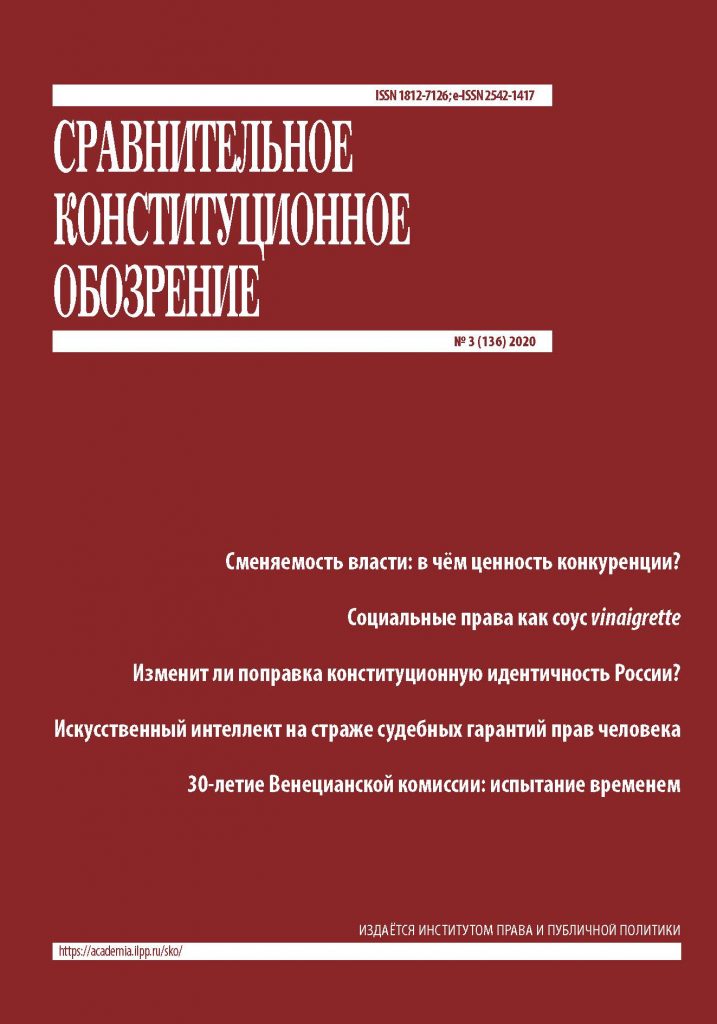 In 2020 European Commission for Democracy through Law (better known as The Venice Commission) celebrates its 30th anniversary. The article deals with the main stages of evolution of expert activities of the Commission especially after expanding the geography of its members (62 member states and several observes). From the very first days of its existence, the European Commission for Democracy through Law (Venice Commission) has emphasized as a priority the effective functioning of democratic institutions through the implementation of the rule of law principles, especially in the field of constitutional law and the administration of justice. According to statistics of the Commission in 2019 were adopted 43 documents, from them 6 thematic compilations of previous opinions, 22 opinions, 5 opinions amicus curiae, 7 reports, 3 guides and comments. The subject matter of these documents is diverse: constitutional reforms – 2, state bodies – 4, constitutional justice and judicial system – 20, human rights – 10, other issues (elections etc) – 7. These data indicate an increasing variety of problems of expert activity of the Commission. Expert assessments of the draft Constitution of the Russian Federation of 1993 were among the first opinions of the Venice Commission. Subsequently, the Venice Commission several times addressed the issues of the Russian constitutional system, as well as constitutional system of other states.

METAMORPHOSIS OF THE RUSSIAN CONSTITUTION

The current Russian constitutional reform provoked an intensive debate on the nature, legal substance and consequences of the whole bulk of constitutional amendments introduced in the year 2020. From the one hand, the initiators of reform were keen on affirmation of a proven formal and even substantial continuity of amendments with the text of the Basic Law of 1993. From the other hand, their opponents demonstrated the apparent transformation and distortion of many important constitutional provisions regarding some key constitutional principles – law-based state, federalism and local self-government, parliamentary rule, bicameralism, separation of powers, independent justice and constitutional limitations of presidential terms in power. The author thinks that these two contested opinions could find junction in a framework of a new theoretic explication, namely of constitutional dictatorship formula.

THEORY AND PRACTICE OF ROTATION IN OFFICE: WHOSE TRADITIONS DOES RUSSIA FOLLOW?

The “nullification” of the presidential terms, announced in Russia in March 2020 and judicially approved immediately after that, has come under heavy criticism from the legal community. As in many other cases, the doctrinal discussion of this event’s legal aspects mainly develops in two directions. The first is an analysis of the logical compatibility of the Constitutional Court of the Russian Federation’s decision with its previous legal positions, and the second is a reassessment of the balance of constitutional values established by the legislator and the judges. However, a more promising one is a conceptual and methodological analysis of judicial argumentation aimed at exploring genetic and logical-semantic relations between the main legal concepts that are used in it, implying also an assessment of this argumentation from the point of view of the methodological rules of judicial reasoning. A key legal concept for both the decision’s motifs and the doctrine is one of rotation in office.

SOCIAL RIGHTS IN THE CONTEXT OF NEW POWERS OF THE PRESIDENT

The amendments of 2020 to the Russian Constitution changed the model of separation of powers by strengthening the role of the Presidents as a real head of the executive and by weakening the role of the Chairman of the Government, introduced additional guarantees for the President in case of impeachment or initiation of criminal prosecution, allowed him to stay in office for two more terms and also made the judiciary, including the Constitutional court, and the prosecution authorities dependent on him through the nomination and dismissal procedure. The move from mixed system of government to the presidential one was introduced in the public discourse as an insignificant and purely technical one, while the main emphasis was made on social and ideological blocks of newly introduced amendments. The necessity of them was justified in mass media and public statements of the government officials by the desire to improve the social security of Russian citizens, guarantee more serious protection of the state’s sovereignty from the foreign influence in the legal filed and constitutionalize traditional values, including the memory about the victory and heroism in Great Patriotic War as well as recognition of marriage solely as a union of man and woman. The article contains analysis of the so-called “social amendments” in the context of the theoretical views of legal scholars on social rights and casts doubts on constitutionalization of these rights in the chapter on federalism vis-à-vis their declaration in the first two chapters of the Constitution, which contains the list of fundamental rights, including social, economic and cultural ones.

RIGHT TO JUDICIAL PROTECTION AND ACCESS TO COURT IN THE ERA OF DIGITALIZATION: VALUE OF EXPERIENCE IN COMMON LAW COUNTRIES FOR RUSSIA

The widespread use of information and communication technologies (ICT) in state activities (including justice) makes the topic of legal consequences of informatization and digitalization of justice extremely relevant. In particular, one of the more challenging tasks is to examine the phenomenon of electronic justice (e-justice) and to revise in that regard the Russian legislation governing the judiciary and legal proceedings. Legal issues concerning the implementation of e-justice have more than once become the subject of consideration in various scholarly papers on procedural law. However, these issues undoubtedly are fundamentally and, above all, constitutionally significant, since they directly affect the fundamental right to judicial protection and access to court, as well as a number of other fundamental rights and constitutional principles. In the process of informatization and digitalization of justice such principles as the independence of the court and judges, accessibility of justice, fair trial, openness, publicity and transparency of justice, the principle of adversarial trial must be taken into account.

IDENTITY AND TRANSFORMATION OF MODERN LAW

This article is about the reasons, features, and prospects for the development of so-called defensive constitutionalism. The author tried to generalize the results of legal disputes and scientific discussions about identity. She also highlighted the main ones and focusing on certain shades that would help to understand their causes and features. For example, on the problem of the correlation between the concepts of national and constitutional identities, on the defensive-sovereign nature of the reasons for the transformation of one concept into another, and on the inadmissibility of mixing them. A particular form of defense constitutionalism is artificial constitutional identity. The article analyzes its European samples in Hungary and Latvia. To assess the limits of judicial interpretation in identity disputes, it is proposed to introduce a criterion of constitutional integrity. At the same time with lawyers, political scientists have also concluded that the problem of identity is becoming more acute in the world. They analyze the processes of globalization and it is in them that they find the origins of this phenomenon.