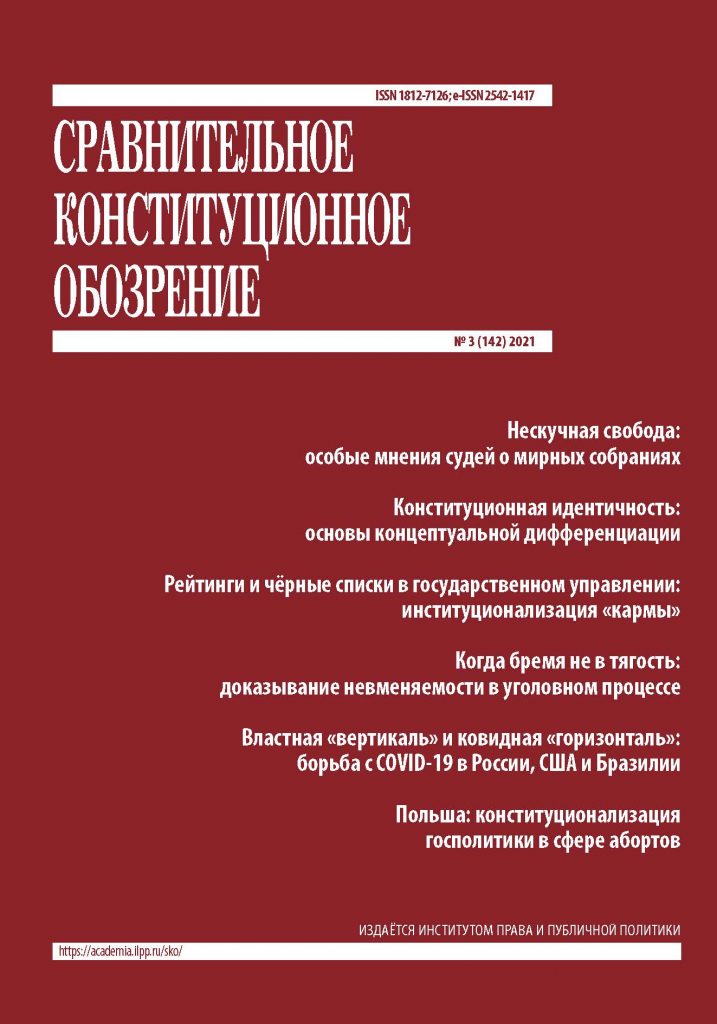 DISSENTING OPINIONS ON THE FREEDOM OF PEACEFUL ASSEMBLY

LEGAL-THEORETICAL NATURE OF THE CONCEPT OF CONSTITUTIONAL IDENTITY

The author firstly considers the problem of ambiguity of the term “identity”, as well as its relationship with related concepts. Following from this, the main approaches to the genesis and nature of constitutional identity, including alternative interpretations are considered. The question of the nature of constitutional identity, according to the author, is of fundamental importance for the theory. The author tries to consider both traditional (positivist) and alternative points of view on this issue.

HUMAN RIGHTS IN A NEW REALITY

THE SOCIAL CREDIT SYSTEM IN CHINA: A MODEL OF CONSTITUTIONALISM FOR THE ERA OF CRISES

This paper focuses on the probable transformative effects of the application of the Chinese Social Credit System and similar projects in the realm of public administration on constitutional rights and freedoms, balances in citizen-state relations, and the model of statehood. The starting point of the research is the assumption that the Social Credit System, despite its specifically national Chinese peculiarities, can be seen as a reflection of a broader tendency towards the use of reputational information, techniques of ranking (grading) and risk management in the process of exercising the state power.

LAW IN A TIME OF CRISIS

EMERGENCY POWERS OF THE AUTHORITIES OF THE CONSTITUENT UNITS OF THE FEDERATION (STATES) IN RUSSIA, THE USA AND BRAZIL AMID THE SPREAD OF A NEW CORONAVIRUS INFECTION

Due to the new coronavirus pandemic, high alert regimes were introduced across the Russian Federation in spring 2020. These emergency regimes were established exclusively by the state bodies of the Russian Federation’s constituent units — federal authorities did not introduce their own emergency regimes. This decentralized strategy of fighting the pandemic was also introduced by the USA and Brazil. Their states, without the sanction of the federal government, and in the case of Brazil, ignoring its bans, set emergency restrictions similar to those in Russia. The legal regulation of emergency regimes existed before 2020, when constituent units of the federation (states) actively used their emergency powers. However, the regimes introduced during the fight against the pandemic were slightly different to previous ones.

Allocation of the burden of proof is a key issue of criminal procedure that is affected by multiple legal and social factors. Under due process principles, the defendant’s right to a fair and impartial trial is deemed to be the epicenter of the whole structure. However, efficient law enforcement is a prominent public interest that must be considered. This article explores the correlation between public and private interest in proving insanity under the law of New York, which provides great empirical background due to its long history of legal disputes and legislative changes.

In France, the understanding of the constitutionality of law and the wider institution of constitutional control have interesting features, especially when compared to other countries that use the traditional, legal European (Kelsen’s) model. These include the originality of the standard, against which legislative acts are checked. It is the so-called constitutional bloc, which, in addition to the 1958 Constitution itself, includes the Declaration of the Rights of Man and Citizen of 1789, the Preamble to the 1946 Constitution, the 2004 Environmental Charter, as well as the principles to which the Constitutional Council attaches constitutional significance.

YOUR BODY IS NOT ONLY YOUR BUSINESS: COMMENTARY ON POLAND’S CONSTITUTIONAL TRIBUNAL JUDGMENT OF 22 OCTOBER 2020 NO. K 1/20

For about 30 years, the topic of abortion has remained a “bone of contention” between conservative and liberal members of Polish society. In October 2020, these discussions moved from the political and religious planes to the legal field: the Constitutional Tribunal of the Republic of Poland considered the issue of women’s right to “eugenic abortion”. The Constitutional Tribunal scrutinized the provisions of a specialized law, allowing the termination of pregnancy in case of a high probability of a severe and irreversible fetal malformation or an incurable disease threatening its life. As a result, in the Judgment of 22 October 2020 no. K1/20 the Constitutional Tribunal upheld the position of the applicants, a group of deputies of the Sejm, and declared the contested legal norms unconstitutional.