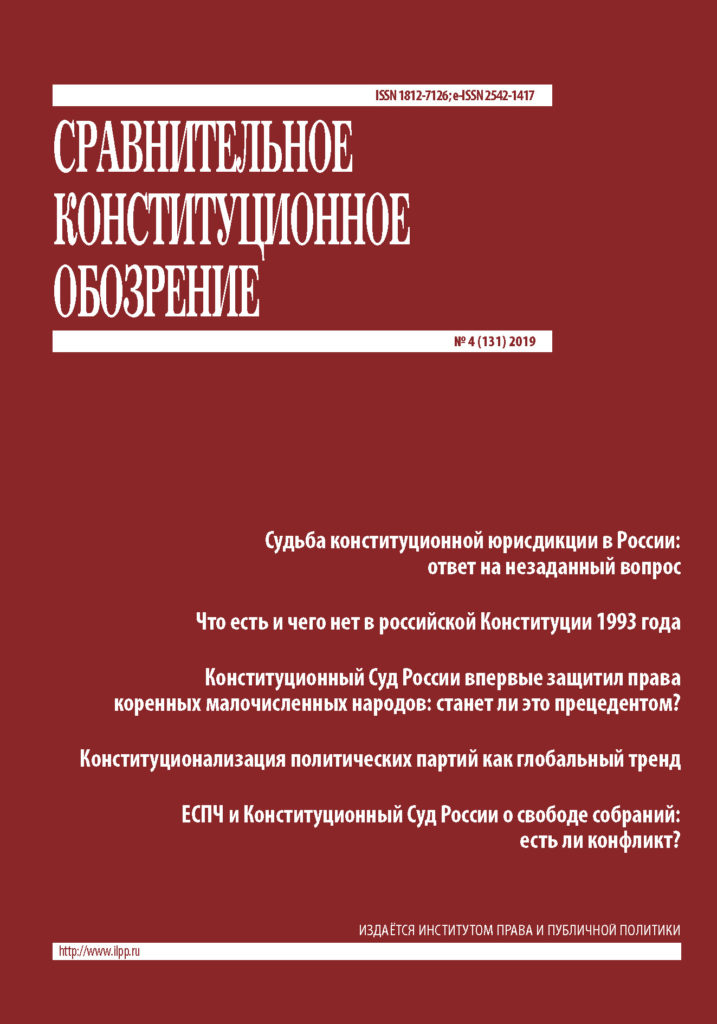 This article discusses approaches of the Constitutional Court of the Russian Federation and the European Court of Human Rights to cases concerning the freedom of expression and the freedom of assembly on the example of several significant situations reviewed by both judicial bodies. The article consists of two parts. Applying the comparative-law methodology, the first part describes approaches of the Constitutional Court and the European Court to freedom of assembly and freedom of expression cases, makes conclusions regarding particular features of the methodology of both bodies regarding the said category of cases. With regard to conclusions from the first part, the second part of the article studies substantial differences between the approaches of the Russian Constitutional Court and the European Court of Human Rights on concrete examples.

As a result of the unified essence of regulatory affairs as a logical operation for comparing the meaning of several normative legal acts, disagreements have yet to cease about whether it is possible to realize normal and constitutional direct regulation according to unified rules for administrative legal proceedings. There is a difference of the subject of legal action within the framework of the named types of direct regulation that are mainly seen in the method with the help of which they are realized.

RUSSIAN CONSTITUTIONAL COURT: IS IT TIME TO PUT AN END TO ITS HISTORY?

This article questions the opinion prevailing in the contemporary literature that the Russian Constitution of 1993 has predominantly liberal character. Author researches the original intent of the authors of main draft of the Constitution (sequentially liberal) and tries to understand to what extent their ideas were realized in the final text, presented for the people’s voting in December 1993.

VALUES OF THE RUSSIAN CONSTITUTION: THE OBSERVER EFFECT?

The articles are freely available

The proposed response to the article of S.Belov considers the ratio of meanings in the text of the Constitution and the results of its interpretation; descriptive and prescriptive approaches to constitutionalism; object and subject of scientific knowledge. The observer effect known since the formation of the nonclassical paradigm indicates a change in the observed system as a result of the observation itself.

THE METHODOLOGY OF THE EXPERIENCE OF THE AXIOLOGICAL ANALYSIS OF THE CONSTITUTION IN A COMMUNICATIVE CONTEXT: AN ANSWER TO CRITICAL NOTES BY A. TROITSKAYA

The expansion of the subject of constitutional regulation led to the inclusion in the constitutions of foreign countries of norms that establish the basis of the legal status of political parties, which began to occur after the First World War, and has become a global trend since the middle of the 20th century. The current significant difference in the volume of regulation of these institutions in the constitutions has led to an analysis of its causes.

THE CASE OF TRADITIONAL HUNTING, OR THE FIRST EXPERIENCE OF PROTECTION OF THE RIGHTS OF INDIGENOUS PEOPLES IN THE RUSSIAN CONSTITUTIONAL COURT

The Russian Constitutional Court’s Judgment (Postanovlenie) of May 28, 2019 No.21-P on traditional hunting is analysed in the paper. This decision for the first time protects the rights of the indigenous peoples of the North, Siberia and the Far East. The author reveals the features and constitutional status of these peoples, describes the reality of respect for their rights in Russia. The importance of the protection of these rights by means of constitutional justice and, above all, by using a constitutional complaint is explained.