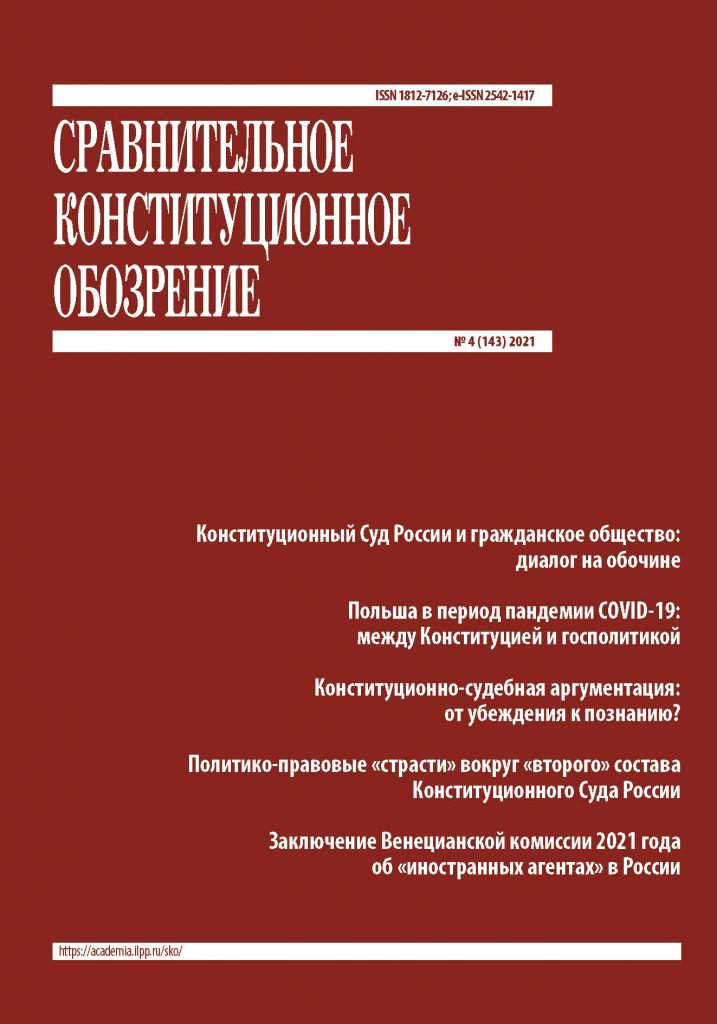 The article examines the institution of a “foreign agent” that appeared in Russian legislation in 2012. The author, analyzing American legislation, the position of the Venice Commission, the Office for Democratic Institutions and Human Rights of the Organization for Security and Cooperation in Europe (hereinafter — the OSCE/ODIHR), the decisions of the Constitutional Court of the Russian Federation, as well as the existing Russian judicial practice, comes to the conclusion that ’misappropriation’ status of a foreign agent by the Ministry of Justice of Russia for non-profit organizations (hereinafter — NPOs) occurs in the absence of clear legal definition of the term “political activity”, does not correlate with the identification of the real connection and activities of NPOs on the order or instruction of a foreign donor, and is actually applied in those cases when it comes to appeals to government agencies, criticism of government agencies or assessment of their decisions. All this indicates that the purpose of the restrictions imposed by the state was by no means a desire to ensure transparency and openness through access to information about foreign financing of non-profit organizations, but rather the purpose was to politically stigmatize and impose additional organizational and financial burdens on NPOs, which dare to criticize the authorities. The author advocates the complete abolition of this institution of a foreign agent, since the pre-existing Russian legislation already made it possible to exercise control over the financing and activities of NPOs. The expansion of the number of types of foreign agents, introduced since December 2019 (first in terms of recognition by media as foreign agents), led by December 2020 to the appearance in Russian legislation of individuals of foreign agents and foreign agents-unregistered public associations and even greater and disproportionate restrictions on the constitutional the right to association. Moreover, the status of a “foreign agent” (in relation to a candidate for an elective office and a candidate affiliated with an acting foreign agent) is supposed to be introduced into the electoral legislation with the obvious goal of political stigmatization of persons trying to exercise their passive electoral right.