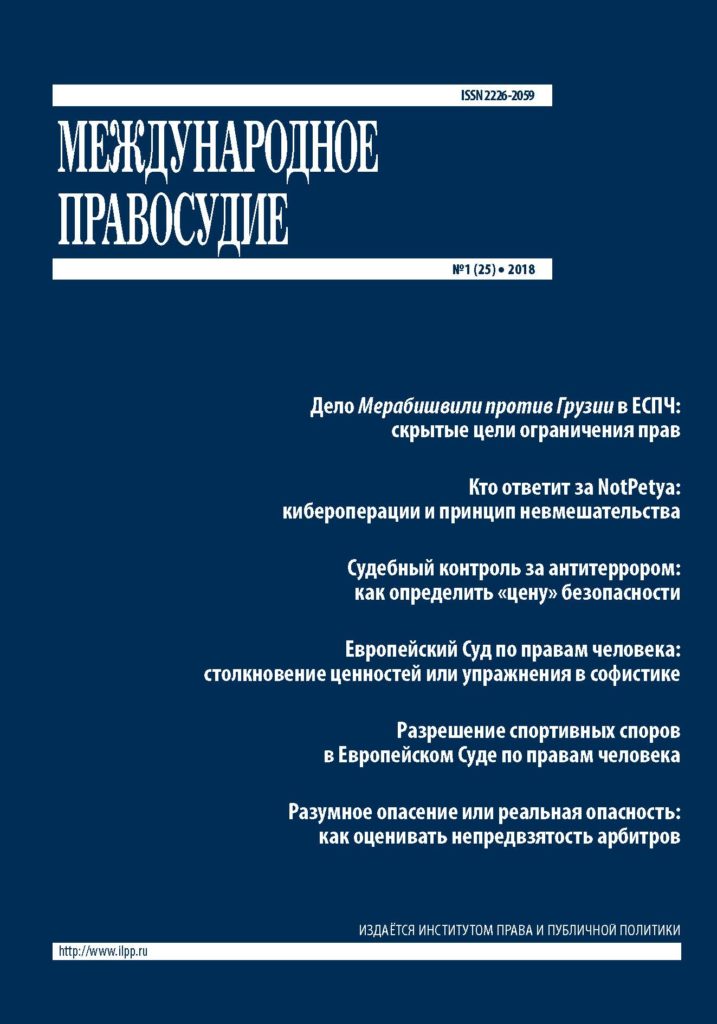 This article focuses on the case law of the Inter-American Court of Human Rights for 2017. Through an analysis of the Court’s principal rulings and advisory opinions, the authors’ main purpose is to identify the innovations and progress of the Court’s jurisprudence in specific subjects, thus establishing its potential contributions not only for the State’s national law and the Inter-American system, but also for other regional human rights protection systems.

EUROPEAN COURT OF HUMAN RIGHTS: REVIEW OF THE GRAND CHAMBER JUDGMENT OF 28 NOVEMBER 2017 IN THE CASE OF MERABISHVILI V. GEORGIA (APPLICATION NO. 72508/13)

The Grand Chamber judgment of the European Court of Human Rights in the case of Merabishvili v. Georgia concerns the arrest and pre-trial detention of a former Prime Minister of Georgia, which, as claimed by the applicant, pursued ulterior purposes. The Grand Chamber concluded that, notwithstanding that the arrest and pre-trial detention initially conformed to the Convention, a continuation of the detention based on insufficient grounds and its use by the Georgian authorities to obtain information from the applicant violated respectively Article 5 § 3 and Article 18 taken in conjunction with Article 5 § 1 of the Convention.

THE INTERNATIONAL LEGAL PRINCIPLE OF NON-INTERFERENCE AND CYBER-OPERATIONS: UNJUSTIFIED EXPECTATIONS?

This article accesses whether and to what extent the principle of non-intervention into matters within domestic jurisdictions, which is one of the basic principles of International Law, is applicable and able to effectively deter so called “low-intensity cyber-operations”, i. e. computer network attacks which do not fall under the notion of “use of force”. For this purpose, the author tries to clarify the content and scope of application of this principle in International Law and comes to the conclusion that relevant acts of “soft law”, by leaving the concrete shape of this principle foggy, reflect a comfortable compromise reached between states.

HEARING LIFE: THE EFFECT OF ACTS OF AN INTERNATIONAL COURT IN NATIONAL LEGAL SYSTEMS

Fight against terrorism is exemplary for the conflict between the rights and interests of society as a whole on the one hand and the rights of individuals on the other hand. The European Court of Human Rights is faced with a panoply of different complaints: by victims (such as in the case Tagayeva v. Russia), by those accused of being terrorists (El Masri v. Macedonia, Ibrahim v. the United Kingdom), by potential future terrorists (K2 v. the United Kingdom), by family members of deceased terrorists (Sabanchiyeva v. Russia), as well as supporters whose statements are sanctioned as hate speech (Leroy v. France). In its jurisprudence the Court has to take into account the limits of “ultra posse nemo tenetur” when assessing the State’s obligations to take effective preventive and repressive measures.

In the past few years, the supreme courts of member states of the Council of Europe have repeatedly refused to comply with the European Court of Human Rights judgments with reference to the priority of domestic law or other obstacles existing at the level of internal order. This phenomenon was named “principled resistance.” This article analyzes “principled resistance” in light of the critical approach to international law, voiced by D.Kennedy, J.Boyle, and M.Koskenniemi. This approach suggests several key ideas: the dependence of law on politics, the balance of autonomy and order, and the extension of argumentative possibilities. It considers human rights contextually, i.e. in connection with the environment in which they are discussed and act. It follows that human rights are not a single institution, but two (or more) institutions fixed in different orders. In this regard the phenomenon of “principled resistance” reflects not only the conflict of positions, but also the incompatibility of coordinate systems in which these positions were formed.

SPORT DISPUTE SETTLEMENT IN THE EUROPEAN COURT OF HUMAN RIGHTS: THE CURRENT STATE OF AFFAIRS AND SOME PROSPECTS FOR THE FUTURE

Accusations according to which Russian athletes are guilty of breaching anti-doping rules make national legal scholars and practitioners search more actively for efficient ways to defend athletes’ rights. The European Court of Human Rights holds much interest as a potential forum for resolving sport disputes. It is a controlling mechanism set up by the 1950 European Convention on Human Rights and Fundamental Freedoms. The present article gives an overview of the ECtHR jurisprudence on sports disputes that is being formed. It is divided into three categories depending on the violations of the convention rights indicated by the applicants: Art.8 (right to respect for private and family life); and Art.2 of Protocol No.4 (freedom of movement); Art.6 (right to a fair trial); Art.3 (prohibition of torture and inhuman or degrading treatment or punishment) and Art.5 (right to liberty and security).

THE PROBLEM OF THE JURISDICTIONAL EFFECT OF MOST-FAVOURED NATION CLAUSES: A VIEW FROM THE CONTEXT OF SYSTEMIC VALUES OF INTERNATIONAL INVESTMENT LAW

The Decision of the Tribunal from January 25, 2000, in Maffezini v. Spain has become a starting point for developing inconsistent case-law in the area of investment disputes settlement concerning the jurisdictional effects of most-favoured nation clauses contained in bilateral investment treaties. This inconsistency has developed into one of the most debatable issues in the area of settling international investment disputes. The present article is based on a resort to the systemic values of International Investment Law as a guide that can help participants of the debate to leave the circle of a retrospective exchange of arguments. It is argued that taking these values into consideration should correspond to the modern context of the discussion, which is different from that which existed at the birth and crystallization of the controversy.

THE APPELLATE BODY OF THE WORLD TRADE ORGANIZATION: PERSPECTIVES OF DEVELOPMENT

THE UNBIASED NATURE OF ARBITRATORS IN INTERNATIONAL COMMERCIAL ARBITRATION: APPROACHES TO EVALUATION

One of the most difficult problems of international commercial arbitration nowadays is bias. The links that can arise between the arbitrator and the parties are much broader and more diverse than we sometimes can imagine. How are we to evaluate whether arbitrators are unbiased, in order to ensure compliance with the principle of independence and impartiality of the arbitrators and maintain the right of the parties to elect arbitrators? In this article, the author compares standards and approaches to the evaluation of the unbiasedness of judges and arbitrators that have developed in international practice. Given the fundamental difference between a judge as a public official and an arbitrator as private practitioner, the author comes to the conclusion that they should be subjected to different standards of independence and impartiality.