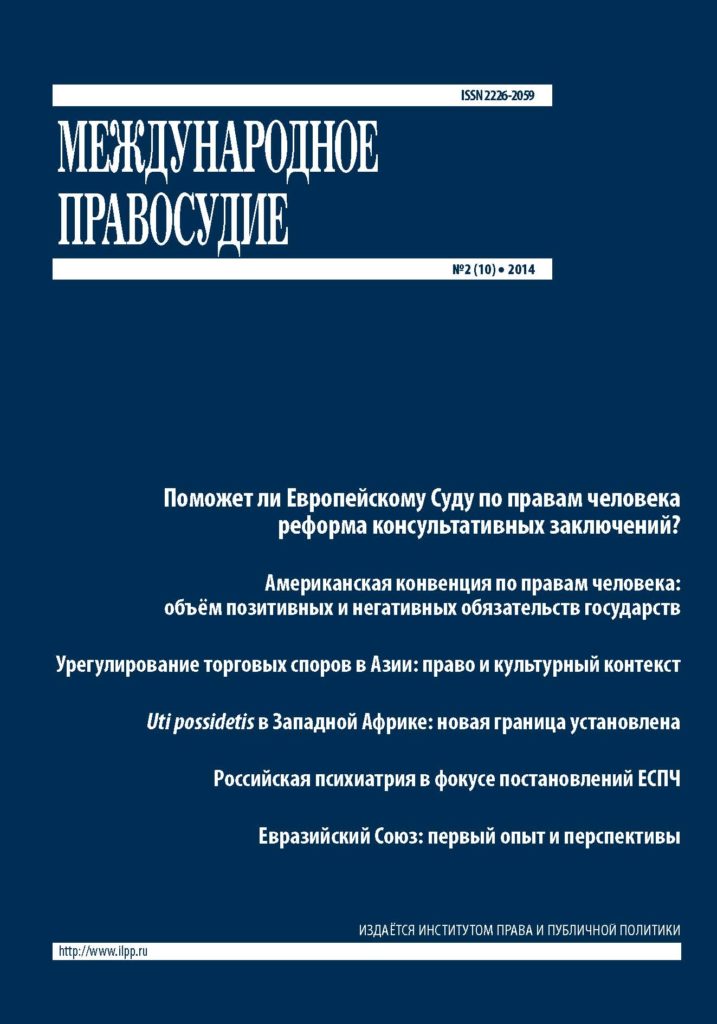 REFORM OF THE EUROPEAN COURT OF HUMAN RIGHTS – CURRENT DEVELOPMENTS

This article deals with three current reform initiatives which are in the process of final confirmation by the Member-States.

In its Judgment of 16 April 2013 the International Court of Justice had to determine the line of the boundary in dispute between Burkina Faso and Niger. For this purpose it applied the principle of intangibility of boundaries inherited from colonization as well as the Agreement between the two Parties of 28 March 1987 which provided practical indications as to how to give effect to this principle.

The article is devoted to the analysis of the European Court of Human Rights in cases of violations of human rights problems within the Russian system of mental health care. This article contains three thematic blocks, each of which combines several decisions with a brief description of the circumstances of the case, outlining the violations, the most important positions and the Court’s findings, as well as a description of the changes in law and practice of the Russian Federation, which followed as general measures of execution State Court judgments.

The article highlights the case-law of the supervisory bodies of the American Convention on Human Rights, 1969 on freedom of thought and expression. Particular attention is given to cases of murder/ extrajudicial killings and violence against journalists, to examples of prior censorship, as well as direct and indirect restrictions on freedom of thought and expression in the space of the OAS, that constitute violations not only of Art. 13 of the American Convention, but also of the Declaration of Principles on Freedom of Expression, 2000. The article stress the role of the OAS Special Rapporteur on freedom of expression.

TOWARDS THE CREATION OF THE EURASIAN UNION: INTEGRATION AND SUPRANATIONALISM

Protocol 16 ECHR will provide for an extension of the advisory jurisdiction of the European Court of Human Rights (ECtHR), enabling highest national courts to request advisory opinions on questions of principle concerning the interpretation of the European Convention on Human Rights (ECHR) or its Protocols. This extension of the ECtHR’s advisory jurisdiction aims to achieve two goals: a reduction in the ECtHR’s excessive docket, and the enhancement of dialogue between the ECtHR and (highest) national courts. While the aims of this reform initiative are laudable, we argue that Protocol 16 is likely to fail to achieve its objectives.

This article presents a broad enough view. On the one hand, consider the specific content of the American Convention on Human Rights as an international treaty and its interpretation of the Inter-American Court of Human Rights. In this context, will highlight the content, scope and, most importantly, the legal consequences arising from the general obligation of States enshrined in Article 2 in conjunction with Article 1(1) of the Convention in national measures. On the other hand, the article provides an overview of the legal positions of the Inter-American Court of Human Rights aimed at expanding the obligations of States – members of the Convention by a wide range of additional, specific commitments.

The article is dedicated to different approaches utilized by Asian and Western countries in settlement of international trade disputes. The author demonstrates that most Asian countries follow their own way in resolution of interstate trade disputes in WTO and regional free trade agreements. It can be characterized as less contentious and more oriented toward cooperation and preservation of good relations between states for cultural and philosophical reasons. Dispute settlement mechanisms must be neutral, of lower cost and less resource-intensive, with lower extent of legality. One of such mechanisms is Permanent Regional Good Offices for trade disputes in Asia.

THE EUROPEAN COURT OF HUMAN RIGHTS AND THE CONSTITUTIONAL COURT OF GERMANY: THE IMPACT, RATHER THAN RIVALRY