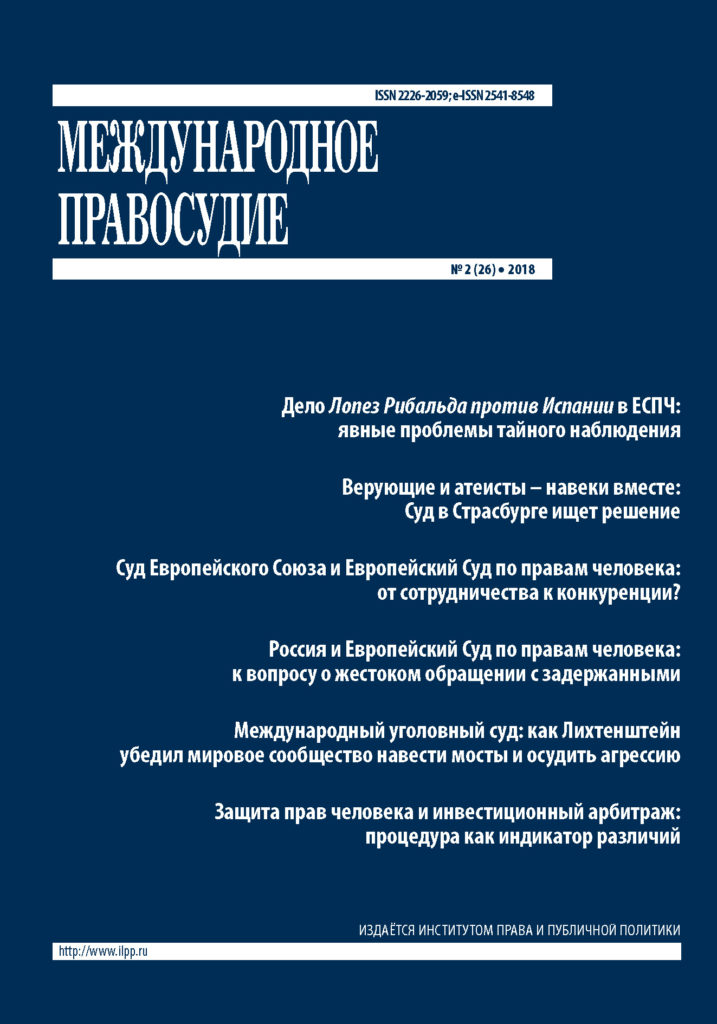 In the judgment in the case of López Ribalda v. Spain, the Chamber of the European Court of Human Rights considered a situation concerning (1) the covert video surveillance of a Spanish supermarket’s employees at their workplace in connection with suspicions of theft and (2) the use of the video material obtained during the proceedings. The applicants claimed these actions constituted a violation of their right to respect for private life and the right to a fair trial. The Chamber found that the covert video surveillance without prior notification had led to a violation of Article 8 of the European Convention on Human Rights. Arguments on the proportionality of this measure with the legitimate aim of protecting the employer’s interest in the protection of his property rights were dismissed as these rights could have been safeguarded by other less strict means.

EUROPEAN COURT OF HUMAN RIGHTS: REVIEW OF THE JUDGMENT OF 22 FEBRUARY 2018 (FIFTH SECTION) IN THE CASE OF LIBERT V. FRANCE (APPLICATION NO.588/13)

The judgment of the European Court of Human Rights in the case of Libert v. France concerns the dismissal of a French national railway company’s employee after the seizure of his work computer revealed a significant number of forged certificates and pornographic files. The European Court held that the railway company – a public-law entity supervised by the state – was a “public authority” within the meaning of Article 8 of the Convention.

EUROPEAN COURT OF HUMAN RIGHTS: REVIEW OF THE DECISION OF 30 JANUARY 2018 (THIRD SECTION) IN THE CASE OF SHTOLTS AND OTHERS V. RUSSIA (APPLICATION NO.77056/14)

The decision of the European Court of Human Rights (Section III) in the case of Shtolts and Others v. Russia concerns the non-enforcement of, or delays in the enforcement of judgments ordering the State to provide applicants with social housing leading to potential violations of Article 6 of the European Convention on Human Rights and Article 1 of Protocol No. 1 to the Convention. The present case was examined in light of the pilot judgment in Gerasimov and Others v. Russia, in which the Court ordered Russia to create effective remedies for situations of non-enforcement or delayed enforcement. In the present case, the Court applied an exception to the principle of exhaustion of domestic remedies which implies that the assessment of whether these remedies were exhausted is normally carried out with reference to the date of application to the Court.

INTERNATIONAL ORGANIZATIONS AND DISPUTE SETTLEMENT: SOME ISSUES, TRENDS AND PROSPECTS

THE EUROPEAN COURT OF HUMAN RIGHTS AND FREEDOM OF RELIGION

The article analyzes the case law of the European Court of Human Rights (further – ECtHR) considering an important area of the freedom of religion, namely the use of religious symbols. These cases as well as restricting measures of member states, which have been challenged before the Court, are regularly controversially discussed in many European countries. By taking decision in cases of that category, the ECtHR demonstrates a double approach. On the one side, the secularism and intention to keep the equality of religions on a “zero” level are still favorable by the Court. For this reason, the Court often accepts various restricting measures considering the use of religious symbols. However, the author supposes that in the last time the symptoms of an other approach have been emerging: the Court treats the feelings of religious people in a more accurate manner and takes in consideration the cultural and historical context of a particular country.

THE ISSUES OF OBSERVING ARTICLE 3 OF THE EUROPEAN CONVENTION ON HUMAN RIGHTS BY RUSSIA WITH REGARD TO DETAINEES: THE ECTHR CASE-LAW

This article scrutinizes judgments of the European Court of Human Rights related to the issues of torture and other forms of cruel, inhumane, or degrading treatment applied by Russian law enforcement authorities to detainees. As established, such forms of treatment run counter to Article 3 of the 1950 Council of Europe Convention for the Protection of Human Rights and Fundamental Freedoms and have a pre-disposition to encroach upon the core human rights values recognized in all democratic societies. Out of all ECtHR cases upon the subject, this article focuses on those of Barakhoev v. Russia, Maslova v. Russia, and Shmeleva v. Russia, adopted by the Court in 2017. Specifically, the Court has invoked the autonomous concept of torture and other forms of cruel treatment commensurate with the normative definition stipulated in the 1984 Convention against Torture and Other Cruel, Inhumane, or Degrading Treatment of Punishment (the “official capacity” clause as excluded), with the minimum threshold of severity rule and intensity criterion, which the Court elaborated in its case-law covered by this concept.

ON THE ACTIVATION OF ICC JURISDICTION OVER THE CRIME OF AGGRESSION

THE TRUTH NEEDS ALLIES: THE IMPORTANCE AND PROBLEMS OF INTERNATIONAL FACT-FINDING COMMISSIONS

This article reveals the significance and presents the theoretical and legal grounds of international enquiries, and assesses the role of the Russian Federation in the genesis and development of the concept of international fact-finding commissions. In the author’s opinion, despite its considerable potential, the enquiry procedure is not used by the international community to the full extent. States do not use it even in cases where an international dispute is a disagreement on a point of fact. Single cases, where states used enquiry in order to settle their disputes, were typical for the first half of the 20th century. Fact-finding missions are actively used within the UN, however, the lack of a database and a uniform methodology for investigations is influencing the effectiveness of these missions. In the author’s opinion, this is the result of a “fragmentation” of the missions.

THE EXTERRITORIAL EFFECT OF AMERICAN SANCTIONS

The Countering America Adversaries through Sanctions Act (CAATSA) clearly shows that the United States will counteract Russia and threats stemming therefrom by using sanctions. Among other means, CAATSA provides for secondary sanctions to be imposed on a person who knowingly engages in a significant transaction with a person that is part of, or operates for or on behalf of, the defense or intelligence sectors of the Government of the Russia Federation, irrespective of both where this person is domiciled and conducts its business. The ongoing designation of Russian legal entities and individuals as Special Designated Nationals and Blocked Persons raises before legal science one practical question of the extraterritorial nature of the US legislation and its extension on non-US persons.

HUMAN RIGHTS AND INVESTMENT LAW: INITIATING OF THE PROCEDURE

International procedures in the areas of human rights protection and investment disputes resolution have much in common. However, there are important divergencies, first of all regarding the initiation of such procedures. This article pays attention to the following important nuances. If the procedure for human rights protection is launched by filing a complaint and, as a rule, the State is acting as a respondent (even in rare cases where a proceeding is initiated by an application lodged by a State against another Contracting Party), then in investment disputes the arbitral tribunal examines a dispute and the State may lodge a complaint against a private investor. The latter also has certain responsibilities before the State which creates a possibility for the State to lodge a counterclaim against a private investor.