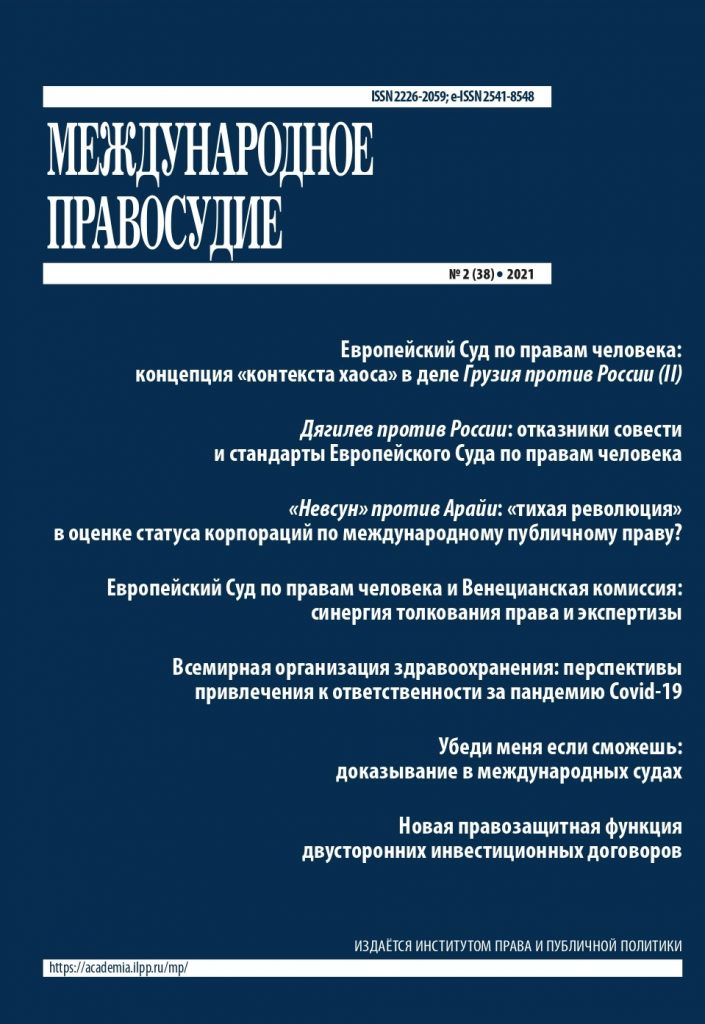 EUROPEAN COURT OF HUMAN RIGHTS: REVIEW OF THE GRAND CHAMBER JUDGMENT OF 22 DECEMBER 2020 IN THE CASE OF SELAHATTIN DEMIRTAŞ V. TURKEY (NO. 2) (APPLICATION NO. 14305/17)

In Selahattin Demirtaş v. Turkey (application no. 14305/17), the European Court of Human Rights considered the issue of pre-trial detention of a member of parliament, who at the time of the events was one of the co-chairs of the Peoples’ Democratic Party (HDP), a left-wing pro-Kurdish political party. The arrest related to the exercise of his duties as an elected representative and restricts him to exercise parliamentary functions. The European Court pointed out the need for a well-founded crime by a parliamentarian, higher requirements for the analysis of evidence by courts in proceedings against current parliamentarians, and the inadmissibility of using detention on ulterior motives of suppressing pluralism and restricting freedom of the political debate. The Court revealed the presence of ulterior motives in the form of suppression of opposition from the circumstances of the arrest, the context of the criminal prosecution, and the conclusions of international organizations.

In the judgment in Georgia v. Russia (application no. 38263/08), the European Court of Human Rights examined the existence of effective control over the territory where the armed conflict between the Russian Federation and Georgia took place. Applying the concept formulated in the case Bankovich and Others v. Belgium (application no. 522207/99), the Grand Chamber determined that Russia had not exercised jurisdiction in the affected territory during the period of active hostilities. However, after the ceasefire, the Chamber found an exercise of extraterritorial jurisdiction by the Russian Federation. In light of the evidence’s full weight, the Chamber found an administrative practice for which the Russian Federation was responsible.

JUDGMENT OF THE SUPREME COURT OF CANADA OF FEBRUARY 28, 2020, ON NEVSUN V. ARAYA: A “QUIET REVOLUTION” IN THE ASSESSMENT OF THE STATUS OF CORPORATIONS UNDER PUBLIC INTERNATIONAL LAW?

The article analyses the Judgment of the Supreme Court of Canada on the Nevsun v. Araya case, which deals with the severe violations of human rights, including slavery and forced labor with respect of the workers of Eritrean mines owned by a Canadian company “Nevsun”. By a 5 to 4 majority, the court concluded that litigants can seek compensation for the violations of international customs committed by a company. This decision is underpinned by the tenets that international customs form a part of Canadian common law, companies can bear responsibility for violations of International Human Rights Law, and under ubi jus ibi remedium principle plaintiffs have a right to receive compensation under national law.

GEORGIA V. RUSSIA (II) AND “A CONTEXT OF CHAOS”: ACTIVE HOSTILITIES AND JURISDICTION OF THE STATE UNDER THE EUROPEAN CONVENTION ON HUMAN RIGHTS

In Georgia v. Russia (II), the European Court of Human Rights used the concept of a “context of chaos” to substantiate the lack of state jurisdiction during the active phase of hostilities. This concept is applicable in the establishment of extraterritorial jurisdiction based both on effective control over an area and on the state agent authority and control over individuals. The Court also developed its position on the importance of the “element of proximity” in establishing jurisdiction over the victims of shelling. At the same time, the ECtHR left open the question of the relationship between the concepts of “element of proximity” and “context of chaos” when establishing jurisdiction based on the state agent authority and control over individuals. Meanwhile, active hostilities and “context of chaos” do not affect the existence of State jurisdiction over prisoners of war and detained civilians.

INTERNATIONAL LEGAL DIMENSION OF THE RIGHT TO CONSCIENTIOUS OBJECTION: CONSIDERATIONS WITH RESPECT TO THE ECTHR JUDGMENT IN DYAGILEV V. RUSSIA

THE VENICE COMMISSION AND THE EUROPEAN COURT OF HUMAN RIGHTS: COMMON GROUNDS

AN APPLE OF DISCORD: PRE-TRIAL PROCEDURE IN INTERNATIONAL JUSTICE AND IN THE JURISPRUDENCE OF THE EAEU COURT

The present article assesses the approaches elaborated in the decisions of international courts and tribunals as well as in the doctrine of international law towards the legal value of pre-trial requirements. The role and significance of such requirements started to increase since almost in any case submitted to a court or arbitration the respondent states try firstly to question either jurisdiction of the court or tribunal in the specific case or admissibility of the claim. As a rule, such objections are based on allegations that the claimant failed to comply with pre-trial requirements such as direct negotiations or prior notification of the respondent about the claimant’s intention to submit the dispute for compulsory adjudication.

KNOCKIN’ ON HEAVEN’S DOOR: THE BURDEN OF PROOF BEFORE INTERNATIONAL COURTS

The issues of proof and determining the party upon which the corresponding burden rests are key to the administration of justice as the determination of the facts of the case is a compulsory stage prior the application of the legal norm. In the Russian legal doctrine the issue of proof has been extensively developed with regard to proceedings before national courts, but not enough in relation to the activity of international courts, except for the European court of human rights. This article explores the theoretical aspects of proof in international courts, analyses the approaches of the International Court of Justice and the Court of Justice of the European Union regarding the distribution of the burden of proof.

WORLD HEALTH ORGANIZATION’S DISPUTE SETTLEMENT IN THE LIGHT OF THE COVID-19 PANDEMIC: PROBLEMS AND PERSPECTIVES

In the light of Coronavirus disease pandemic, the question of state responsibility in global health has become actual as never before. Rarely mentioned in the scientific literature, but at the same time, an important problem is the lack of an appropriate dispute settlement body which is competent to consider cases of violation of the World Health Organization’s instructions. The goal of the article is to research different bodies which are potentially competent to resolve disputes regarding violations in the scope of healthcare and to determine the most appropriate one in the light of responsibility of states over the COVID-19 pandemic. The paper analyzes the possibility of resolving a dispute regarding the new pandemic in the International Court of Justice, through arbitration, through negotiations, within an advisory body, and through the World Health Assembly.

“IF STARS ARE LIT, IT MEANS – THERE IS SOMEONE WHO NEEDS IT”: A NEW HUMAN RIGHTS PROTECTING FUNCTION OF BILATERAL INVESTMENT TREATIES

A new trend in both making and interpreting bilateral investment treaties (BITs) consists in a shift towards the protection of human rights of the host-State population. The authors resort to legal analysis to answer three questions related to this trend. First, how treaties, which are inherently programmed for the protection of investors from host-States, can be used to prevent investors from breaching human rights? Second, are BITs capable to effectively carry out this function? Third, who is the actual beneficiary of the values’ change in BITs? The article identifies three ways how human rights standards are included or respected throughout the BITs’ drating and application processes.