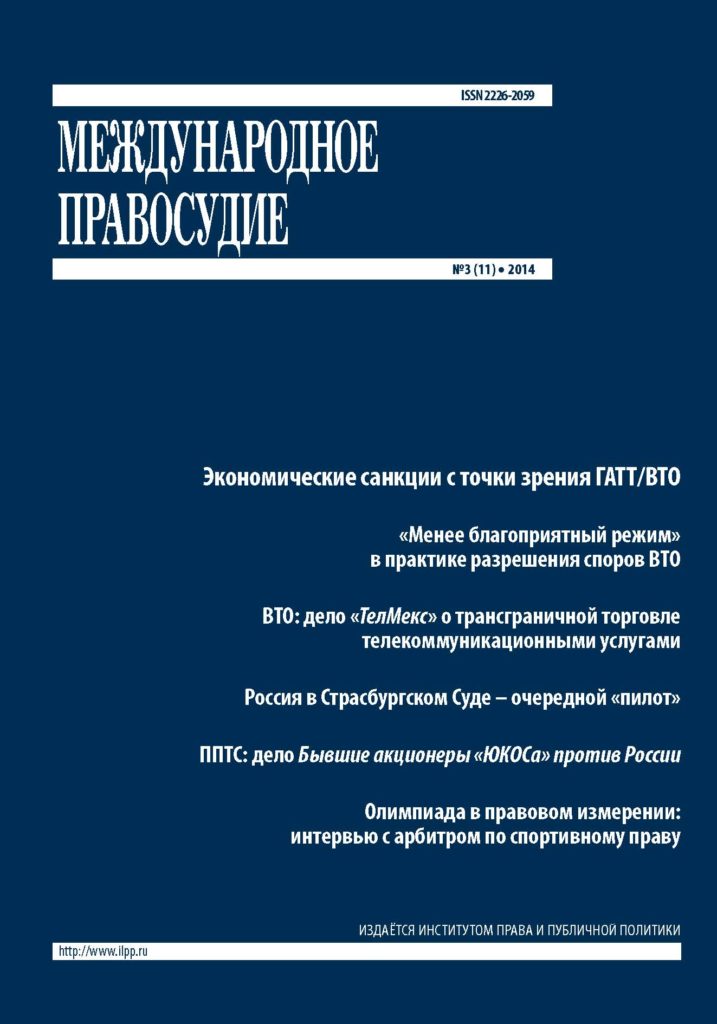 GERASIMOV AND OTHERS V. RUSSIA: A NEW PILOT JUDGMENT OF THE EUROPEAN COURT OF HUMAN RIGHTS

The article analyses the latest pilot judgment of the European Court of Human Rights regarding Russia, issued on July 1, 2014. The judgment applies the systemic problem of non-enforcement of judicial decisions by national courts about the social obligations of the state towards citizens.

TORTURE AS A FACTOR IN VIOLATING THE RIGHT TO A FAIR TRIAL: A REVIEW OF THE EUROPEAN COURT OF HUMAN RIGHTS' PRACTICE IN RUSSIAN CASES

This article analyses the main arguments of the parties and their assessment by the tribunal and examines in more detail the questions of the jurisdiction of the tribunal, Russia’s liability, and evaluation of the losses for which Russia has to compensate the claimants.

The article provides a critical assessment of the World Trade Organization Panel report in the case Mexico – Measures Affecting Telecommunications Services – the first case that dealt exclusively with the General Agreement on Trade in Services (GATS).

This article investigates the International Criminal Court and its features since its establishment under the Rome Statute.

FREEDOM OF ASSEMBLY IN RUSSIA: A STRUCTURAL PROBLEM AND FURTHER VIOLATIONS? AN ANALYSIS IN THE CONTEXT OF THE EUROPEAN COURT OF HUMAN RIGHTS' CASE LAW

The article discusses the systemic nature of a number of problems in regulating and implementating the freedom of peaceful assembly in Russia, including the most recent legislative amendments introduced in Russian law in the summer of 2014.

ECONOMIC SANCTIONS FROM THE GATT/WTO STANDPOINT

This article tries to answer the question how Russia can challenge sanctions using the WTO dispute settlement mechanism.

The national treatment is a cornerstone of WTO system together with the most favored nation treatment. When goods are alike, when treatment is less favorable for imported goods, what are the characteristics of adverse impact on trade, how the violation of national treatment should be demonstrated – answers to all these questions we find in WTO dispute settlement practice.