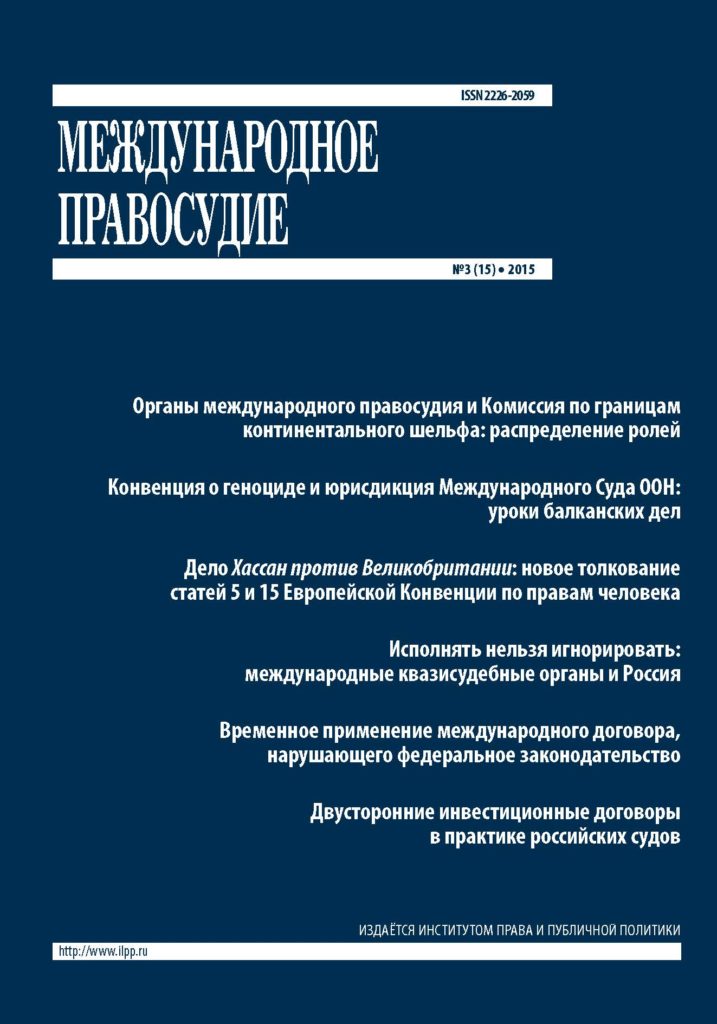 REACHING THE OTHER SIDE OF THE LABYRINTH: THE COMPLEX PATH TO JURISDICTION IN THE CROATIA V. SERBIA CASE

On 3 February 2015, the International Court of Justice rendered its Judgment on the merits in the Croatia v. Serbia case, completing the final chapter in its twenty-two year consideration of allegations of State responsibility for genocide arising out of the dispute in the Balkans. The Court had to determine whether it had jurisdiction to rule on Croatia’s claim in respect of events alleged to have taken place before 27 April 1992 – the date when the Federal Republic of Yugoslavia came into existence as a separate State and became party to the Genocide Convention – a question which had been reserved in the 2008 Judgment on preliminary objections.

DELFI AS V. ESTONIA: DEVELOPMENTS ON THE SUBJECT OF LIABILITY FOR OFFENSIVE COMMENTS ON THE ONLINE-PLATFORMS

In Delfi AS v. Estonia the majority of the Grand Chamber of the European Court of Human Rights confirmed the conclusion made by the Chamber of the European Court in its judgment of 10 October 2013 that holding an online news portal responsible for moral damage done to third parties as a result of the publication of offensive comments by users in the portal's comment environment may not entail a violation of Article 10 of the Convention.

HASSAN V. THE UNITED KINGDOM: FROM CONVENTION TO THE INTERNATIONAL HUMANITARIAN LAW AND A LITTLE BIT BACK

In the Judgment Hassan v. The United Kingdom the European Court of Human Rights reviewed its approach to the correlation between international humanitarian law and the Convention on Human Rights and Fundamental Freedoms in the fields of right to liberty and legality of derogation from obligations under this Convention outside the procedure set forth in Article 15.

In this article the judgment of the Grand Chamber of the European Court of Human Rights in respect to a complaint of a Russian citizen A. Khoroshenko, where the applicant appealed the restriction of family visits for those who are serving a life sentence in prison, is analyzed.

LAMBERT AND OTHERS V. FRANCE: THE EXECUTION OF THE DECISION OF 24 JUNE 2014 BY CONSEIL D’ÉTAT WILL NOT CAUSE A VIOLATION OF ARTICLE 2 OF THE EUROPEAN CONVENTION ON HUMAN RIGHTS

RIGHT TO LIFE AND THE “AUTONOMY OF THE INDIVIDUAL”

The recent Judgment of the European Court of Human Rights on the well-known case of Lambert, which raised the problem of ceasing treatment of paralyzed patient due to «unreasonable obstinacy» is critically analyzed. In this case, the collision of two rights: the right to protection of the patient’s life by the state and the will of the patient, allegedly expressed in other circumstances, about the undesirability of prolonging the agony. The problem was compounded by the uncertainty of the national law.

CONTINENTAL SHELF BEYOND 200 MILES: DETERMINATION OF THE OUTER LIMITS AND DELIMITATION (PART 1)

Both the State practice and the case law of international dispute resolution bodies examined in the present article demonstrate that the delimitation of the continental shelf beyond 200 nautical miles by an international court or arbitral tribunal is possible only if this delimitation does not prejudice the Commission’s functions nor ignore its role in the determination of the outer limits of such a continental shelf.

Russia concluded almost 80 bilateral investment treaties (BITs). However, in 1992–2015 Russian courts (primarily arbitrazh court, but also the Supreme Court and the Constitutional Court) applied only 11 BITs in 22 judgments. These examples show that both the parties to disputes and the courts did not discover the potential of BITs as an instrument of protection of foreign investments on the national level.

TO COMPLY OR NOT TO COMPLY? ON THE LEGAL STATUS OF OPINIONS OF THE UNITED NATIONS WORKING GROUP ON ARBITRARY DETENTION WITHIN THE RUSSIAN LEGAL ORDER

There is another international human rights protection body knocking at the door of the Russian legal order – the United Nations Working Group on Arbitrary Detention. To be more precise, there is a Russian citizen who is knocking at the doors of Russian courts trying to enforce a decision by such a body finding his deprivation of liberty arbitrary.

The UN Compensation Commission was established under the UN Security Council Resolution 692 (1991). The author analyzes the specific features of the Commission and its functional outcomes. Special attention is drawn to the Follow-up Programme for Environmental Awards established by the Governing Council of the Commission in 2005 to monitor both financial and technical implementation of environmental projects undertaken by the claimant governments in accordance with the awarded funds in order to ensure their financial transparency and technical compliance with the recommendations of the F4 Panel.

PROVISIONAL APPLICATION OF AN INTERNATIONAL TREATY INCONSISTENT WITH NATIONAL LAW: IS THE IMPOSSIBLE POSSIBLE?

PROTECTION OF VICTIMS IN ARMED CONFLICTS:IN SEARCH OF AN INTEGRATED APPROACH

EUROPEAN COURT OF HUMAN RIGHTS: CONSENSUS AS A BASIS FOR JUDICIAL FINDINGS

A new book by К. Dzehtsiarou published by Cambridge University Press describes in detail European consensus as a tool of interpretation of the European Convention on Human Rights.

The essay is dedicated to the passing of Professor Otto Triffterer, an outstanding scholar in the field of international criminal law, who made a significant contribution to the development of this branch of international law.