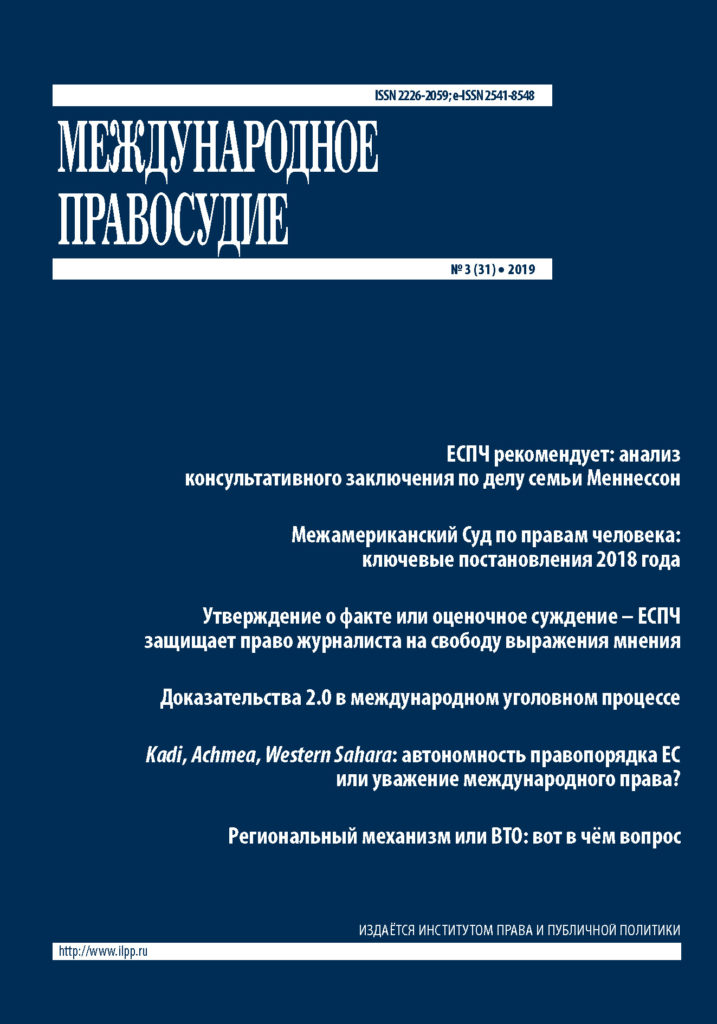 INTER-AMERICAN COURT ON HUMAN RIGHTS: A REVIEW OF PRACTICE FOR 2018

The submitted article presents a brief overview of the Inter-American Court of Human Rights’ most important case law of 2018. As is shown in the paper, in the course of 2018, the decisions of the Court created important developments for the Inter-American law which are significant for the region.

FREEDOM OF EXPRESSION OF JOURNALISTS: CASE COMMENT TO THE ECTHR JUDGMENT SKUDAYEVA V. RUSSIA OF 3 MARCH 2019 (APPLICATION NO. 24014/7)

The confrontation between the free media and the state, represented by its institutions, is a problem not only in modern Russia, but also in other countries. The judgments of the European Court of Human Rights on the complaints brought forth by journalists and the media on violations of article 10 of the Convention are not only a remarkable illustration of such conflicts, but also a reminder for the national courts to ensure the freedom of the media in accordance with domestic legislation and international obligations assumed by the States. In the case of Skudayeva v. Russia, we can see a clearly defined legal position of the ECtHR on the application of article 10 of the Convention regarding the freedom of expression of opinion of a journalist, assessing the actions of the authorities.

EUROPEAN COURT OF HUMAN RIGHTS: REVIEW OF THE GRAND CHAMBER JUDGMENT OF 8 JULY 2019 IN THE CASE OF MIHALACHE V. ROMANIA (APPLICATION NO. 54012/10)

The decision of the European Court of Human Rights in the case of Mihalache v. Romania considered the complaint of Mr. Mihalache who asked that the duplication of proceedings in his case and that he had been tried and convicted twice for the same offence had violated Article 4 of Protocol no.7 to the Convention (the right not to be tried or punished twice). Based on the criteria in the Engel case, the Court found that the proceedings in question were “criminal” in nature.

EUROPEAN COURT OF HUMAN RIGHTS: REVIEW OF THE JUDGMENT OF 25 JULY 2019 (SECTION V) IN THE CASE OF JAFAROV AND OTHERS V. AZERBAIJAN (APPLICATION NO. 27309/14)

In the decision on the case of Jafarov and Others v. Azerbaijan the European Court of Human Rights examined the complaint by the applicants who demanded the recognition of the fact that the decision by Azerbaijani authorities to refuse to register a non-governmental organization “Human Rights Club” was unlawful and performed in violation of the requirements of the legislation on the registration procedure and, therefore, in violation of Article 11 of the Convention for the Protection of Human Rights and Fundamental Freedoms (right to freedom of assembly and association). The Court also took into account the shortcomings of the process of registration of nongovernmental organizations in Azerbaijan, based on the Venice Commission’s Opinion on compatibility of the legislation on non-governmental organizations of Azerbaijan with human rights standards in 2011, and stated that significant delays in the registration process amount to de facto interference with the right to freedom of association.

SURROGACY ISSUES IN THE FORMAT OF “SURROGATE” LAW: A COMMENT ON THE ADVISORY OPINION OF THE EUROPEAN COURT OF HUMAN RIGHTS OF 10 APRIL 2019

On April 10, 2019, the European Court of Human Rights delivered its first advisory opinion under Protocol No.16 to the Convention for the Protection of Human Rights and Fundamental Freedoms. The opinion was adopted upon the request of the French Court of Cassation and regarded as yet another attempt to solve the problem of ensuring that a right to respect for private life of children born of transnational surrogacy agreement is secured. The European Court of Human Rights stated that Article 8 of the Convention requires that domestic law provide a possibility of recognition of a legal parent-child relationship between a child and the intended mother, even when they do not share any biological connection. The article analyzes both substantial and formal aspects of the advisory opinion.

This article is devoted to the analysis of the arbitration practice on labor disputes in the field of football in the context of the interaction of legal positions of the International Football Federation Dispute Resolution Chamber and the Court of Arbitration for Sport within the framework for the interpretation of the FIFA Regulations on the status and transfer of players. Currently, one of the functions of the Court of Arbitration for Sport is to review the decisions of the FIFA Dispute Resolution Chamber in appellate order after the jurisdiction of this body to resolve the disputes between FIFA, FIFA members, confederations, leagues, sports clubs, players, officials and agents of players was approved by FIFA in 2002. The arbitrators of the Court of Arbitration for Sport often adhere to the opposing positions regarding the interpretation of the FIFA Rules when reviewing decisions. In this regard, the author considers it useful to conduct a study on the positions of the abovementioned bodies on the issues of determining the amount of compensation for the unilateral termination of the employment contract, identifying the difference between the “buyout clause” and the “liquidated damages”, and imposing the requirements to arbitration courts established at the national level.

FEATURES OF EVIDENCE IN THE PRACTICE OF INTERNATIONAL CRIMINAL JUSTICE

The article deals with a block of problems related to the process of proving before the international criminal justice bodies, particularly the International Criminal Court, as well as the two international criminal tribunals ad hoc: for the former Yugoslavia and for Rwanda. It underlines the influence that the Anglo-Saxon institutions, including the evidence law, stressed on the constituent documents and the practical activities of these jurisdictional bodies.

The existence of the general and the special regimes in international law constitutes the essence of the phenomenon of fragmentation and requires that a definition be made of the rules according to which an international law norm is selected to be applied in certain case. This issue is particularly relevant in the European Union, as the European Court of Justice seeks to establish the autonomy of the EU legal system and in some cases to set barriers to the application of the general international law norms. The claim of the Court of Justice to be the exclusive interpreter of all and any effective rules in the EU legal order has been especially evident after the Kadi and Achmea cases as well as the Opinion 2/13 on the ECHR accession. This ambition can also be detected in the CJEU’s judgements on the interpretation of the international agreements of the EU Member States with the third countries.

DISPUTE SETTLEMENT UNDER FREE TRADE AGREEMENTS: AN ALTERNATIVE TO THE MECHANISM OF THE WORLD TRADE ORGANIZATION?

DIFFERENT TO INVESTMENT MEASURES? THE NATURE OF PERFORMANCE REQUIREMENTS

Nowadays a rare international investment agreement goes without the provisions on performance requirements (PRs), although the concept has rushed into the international legal framework without a firm scholastic foundation and even without the customary roots. This collective term for the particular investment measure was initially used in the bilateral treaties for designating the tools which the States so as to ensure a better investment regime. Therefore the rough idea of a PRs as a substantive notion is built on the fragmentary knowledge of its separate types: from the local content and the trade balance requirements to the technology transfer and the educationa nd training requirements. For the lack of a generally recognized definition of the performance requirements, the article turns to the scholar’s opinions and the adjudicator’s reasoning, where the different approaches are revealed.