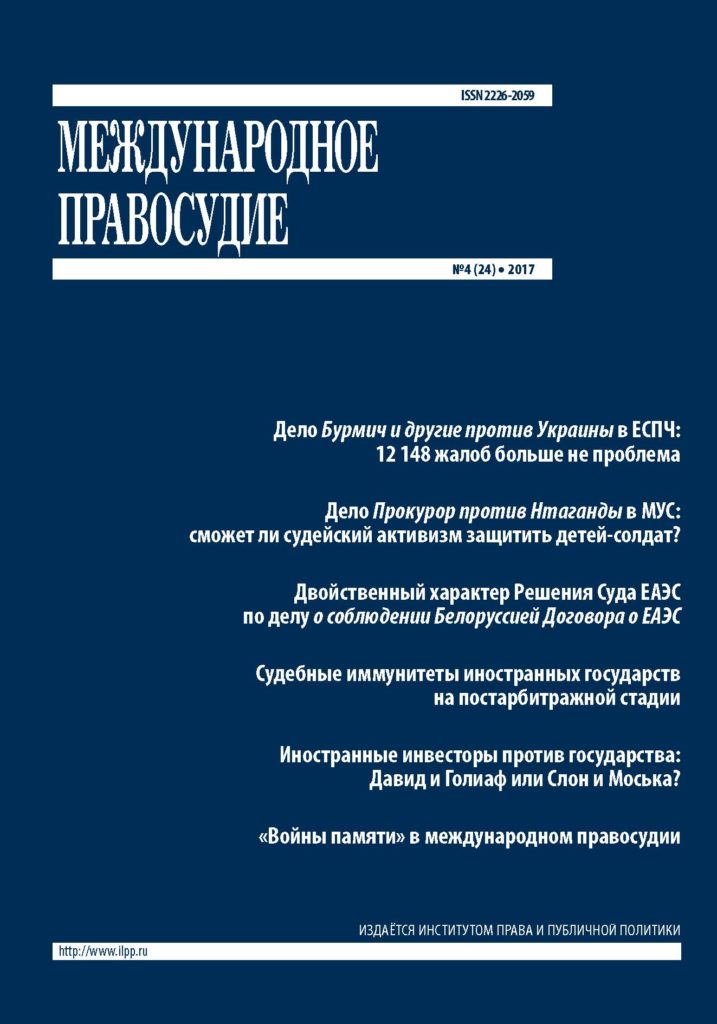 ARBITRATOR’S DECISION IN US – TUNA II (MEXICO) TO DETERMINE THE LEVEL OF CONCESSIONS IN WTO LAW: THE FINAL OUTCOME?

THE “HEAVENLY” AND “EARTHLY” LIFE OF THE COURT OF THE EURASIAN ECONOMIC UNION: A REVIEW OF THE JUDGMENT OF THE COURT IN THE CASE INVOLVING BELARUS’ ADHERENCE TO THE TREATY ON THE EEU

This article is an overview of the Judgment of the Eurasian Economic Union Court from February 21, 2017, which it pronounced in the case of Russia against Belarus concerning Belarus’ compliance with the Treaty on the EEU and some other acts of the Union. In this decision, the Court used its powers to examine an interstate dispute for the first time. The author describes the circumstances of the case, the position of the Court, and the positions of the judges who expressed dissenting opinions. The author’s comments touch upon the political and legal aspects of the dispute, the stylistics of the Decision, and the use of the institution of special opinions. The author makes a number of critical remarks.

In its Judgment from 15 June 2017, the International Criminal Court confirmed its jurisdiction in the case of Bosco Ntaganda and indicated that the sexual exploitation and rape of child soldiers by members of their own armed group constitute a war crime. This decision of the ICC provoked much controversy among experts in the field of international criminal law. Some experts consider this Judgment to be a real breakthrough in the protection of child soldiers from sexual slavery by their own armed group, which before remained “invisible” for international criminal law, while many child soldiers, mostly girls, suffer from violations of their right to sexual integrity. Others accuse the Court of abuse of power and the “blurring” of the definition of a war crime, in an attempt to interpret international humanitarian law based on provisions that in reality it does not contain.

INTERNATIONAL CRIMINAL COURT: REVIEW OF JUDGMENT OF APPEALS CHAMBER OF 15 JUNE 2017 IN THE CASE OF PROSECUTOR V. BOSCO NTAGANDA (CASE NO. ICC-01/04-02/06)

This review is on the judgment of the Appeals Chamber of the International Criminal Court in the case of Prosecutor v. Bosco Ntaganda concerning the war crimes of rape and sexual slavery of child-soldiers committed by the armed forces or groups of which the child soldiers are members. The Appeals Chamber concluded that according to the ordinary meaning, context, and drafting history of Articles 8(2)(b)(xxii) and (e)(vi) of the Rome Statute regarding the “established framework of international law”, members of armed forces or groups are not excluded from protection against the war crimes of rape and sexual slavery committed by other members of the same armed force or group. Thus, having a status of “protected persons” is not a requirement to be a victim of the war crimes of rape and sexual slavery.

EUROPEAN COURT OF HUMAN RIGHTS: REVIEW OF JUDGMENT (GRAND CHAMBER) IN THE CASE OF BURMYCH AND OTHERS V. UKRAINE

The Grand Chamber judgment of the European Court of Human Rights (ECtHR) in the case of Burmych and Others v. Ukraine concerns continuous failure of Ukraine to adopt general remedial measures at the national level to deal with numerous repetitive applications to the ECtHR on the subject of non-enforcement or delayed enforcement of domestic judicial decisions, as required the ECtHR in its “pilot” judgment Yuriy Nikolayevich Ivanov v. Ukraine adopted in 2009. In the situation where the Court’s previous approach of examining thousands of those repetitive cases in an accelerated, summary procedure had no impact on the overall number of such applications, which continued to grow, the Grand Chamber considered that it was no longer justified to continue examination of Ivanov-type applications as the legal issue had already been resolved in the pilot judgment and the Court had thereby discharged its main function. Instead, it has fallen on the Committee of Ministers to deal with such pending (five applications in the present case and 12143 similar applications) and future cases in the process of execution of the pilot judgment.

EUROPEAN COURT OF HUMAN RIGHTS: REVIEW OF JUDGMENT (GRAND CHAMBER) IN THE CASE OF MOREIRA FERREIRA V. PORTUGAL (NO. 2)

The Grand Chamber judgment of the European Court of Human Rights in the case of Moreira Ferreira v. Portugal (no.2) concerns the refusal by a domestic court to review a final judicial decision in a criminal case against the applicant on the basis of a previous Court judgment, adopted in 2011, in which it found a violation of Article 6 § 1 of the Convention for the Protection of Human Rights and Fundamental Freedoms in those criminal proceedings. Under Portuguese law, a final judicial decision may be reviewed including on the ground that the conviction is irreconcilable with a binding judgment of an international body. The national court refused the applicant to review the conviction noting that it was not irreconcilable with the 2011 Court judgment.

AWARDS OF INTERNATIONAL INVESTMENT ARBITRATION TRIBUNALS ON THE MERITS: AN OVERVIEW OF THE MOST REMARKABLE CASES OF 2014–2015

As a rule, international investment arbitration tribunals consider the claims of foreign investors against states hosting such investments. The course and the outcome of such claims are quite difficult to predict since there is no single set of international law rules (either substantive or procedural), nor is there a single dispute resolution body. However, despite this lack of predictability, one may detect certain trends and patterns. This is necessary in order to enable foreign investors and host states to plan their activities, and is also useful in case a dispute arises. This overview gives examples of how international investment tribunals apply the provisions of international treaties that deal with such questions as a host state’s violation of its duty to provide foreign investors with the national treatment, a minimum standard of treatment, a fair and equitable treatment, the state’s duties arising out of an umbrella clause, and selected aspects of expropriation.

The article addresses the issue whether the conclusion of an arbitration agreement by a foreign State by itself implies under Russian law that the foreign State has waived its immunity from jurisdiction for the purposes of the subsequent recognition and enforcement of an arbitral award in the courts where the assets of the debtor-State are located. The issue is resolved from the perspective of both commercial and investment arbitration. The article comments on the judgment of the Commercial Court for the Moscow Circuit dated 29 August 2017 in Tatneft v Ukraine (А40-67511/2017). The article further offers interpretation of an arbitration exception under Article 6(2) of the Federal Law dated 3 November 2015 No. 297-FZ “On jurisdictional immunities of the foreign State and assets of the foreign State in the Russian Federation”. The article derives the offered interpretation from travaux préparatoires to the Law, the UN Convention on Jurisdictional Immunities of the States and Their Property, other treaties and soft law instruments on the issues of State immunity, European Convention on Human Rights and Fundamental Freedoms, State practice and customary international law.

“DEALING WITH THE PAST”: THE DIFFICULTIES OF FORENSIC TRUTH

This article examines the phenomenon of “dealing with the past” in the activities of international criminal tribunals, particularly the International Criminal Tribunal for the Former Yugoslavia. The “politics of memory” is analyzed as one of the elements of transitional justice, which makes it possible to make a transition to peace. There are two main strategies that the state can follow when attempting to deal with its own past: either a policy of silence, or a policy under the motto “never again!” The ambiguity of the truth that is extracted during the course of forensic investigation is emphasized. Particular attention is paid to the psychological and socio-cultural difficulties that arise in a person or an ethnic group when interacting with a different treatment of events than that adopted in their environment. In this regard, the specificity of “memory wars” is revealed as a defensive reaction to another version of historical events. Specific examples illustrate the attitude of the tribunal to the events of the Yugoslav war of 1991 to 1995.