Homepage > IJ > IJ № 4 (36) 2020 > Politicising law or legalising politics? Justiciability and the “political question” on the examples from international justice

Politicising law or legalising politics? Justiciability and the “political question” on the examples from international justice 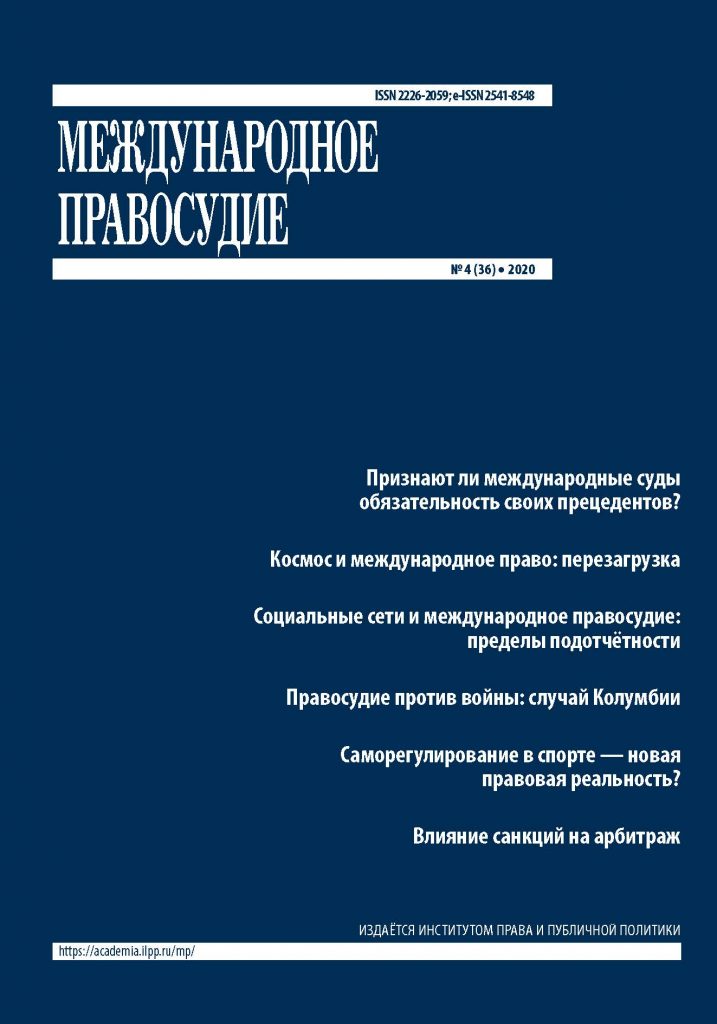 Author is pointing out the problem of interaction between the political nature of the dispute concerned and the competence of international tribunals. To assess such legal interaction the “justiciability” concept is used. This concept, well known from the US and the UK jurisprudence, allow national courts, for the purpose of stable state administration, to exercise “prudency” in invalidating executive acts, guarantee the operation of the principle of separation of powers, preserve the legitimacy of an unelected judicial branch allowing it, at the same time, to participate in a dialogue with the other branches and the public. Despite the fact that the concept initially appeared in the national law, it became equally important for the international dispute resolution system. Using some remarkable recent cases from the supreme national and international tribunals’ practice author concludes that international tribunals are increasingly expanding their own competence to cover issues traditionally reserved for national authorities and/or lying exclusively in the diplomatic realm. The “evolutive” interpretation of provisions of international law adapted by some international tribunals (and other international organs) contradicts their literal meaning as originally intended by the states, is becoming a persistent trend. This entails a natural reaction of national legal systems represented by higher courts: on the one hand, they avoid direct confrontation through maintaining the classical paradigm of respect to international law, and, on the other hand, draw “border lines” designed to limit the jurisdiction of international courts and arbitration tribunals. The politicization of international arbitration is a question that should not be embarrassingly swept under the carpet or considered marginal. Otherwise, there is a risk that it would destroy the international dispute resolution system and, as a consequence, undermine the mechanisms of international law. At the same time, no peaceful resolution of the conflict of jurisdictions is possible without understanding the problem in the legal plane, without joint determination of which cases are justiciable in the international process, and which questions should be considered “political”. Author made the attempt to give a legal definition of the “political question” in the international procedure and formulate legal tests which could help international judges and arbitrators to define, whether they are ready to and whether they should consider the particular case, related to the “political question”, on the merits (and not to recognise it inadmissible on procedural grounds).

About the author: Mikhail Gal'perin – Doctor of Science in Law, Master of Laws (University of London), Professor of International Law, Faculty of Law, Higher School of Economics, Moscow, Russia.

Bendor A.L. (1997) Are There Any Limits To Justiciability? The Jurisprudential and Constitutional Controversy in Light of the Israeli and American Experience. Indiana International and Comparative Law Review, vol.7, no.2, pp.311–377.

Cole J.P. (2014) The Political Question Doctrine: Justiciability and the Separation of Powers: CRS Report Prepared for Members and Committees of Congress. 23 December. Available at: https://fas.org/sgp/crs/misc/R43834.pdf (accessed: 05.12.2020).

Titi C. (2015) Are Investment Tribunals Adjudicating Political Disputes? Some Reflections on the Repoliticization of Investment Disputes and (New) Forms of Diplomatic Protection. Journal of International Arbitration, vol.32, no.3, pp.261–288.