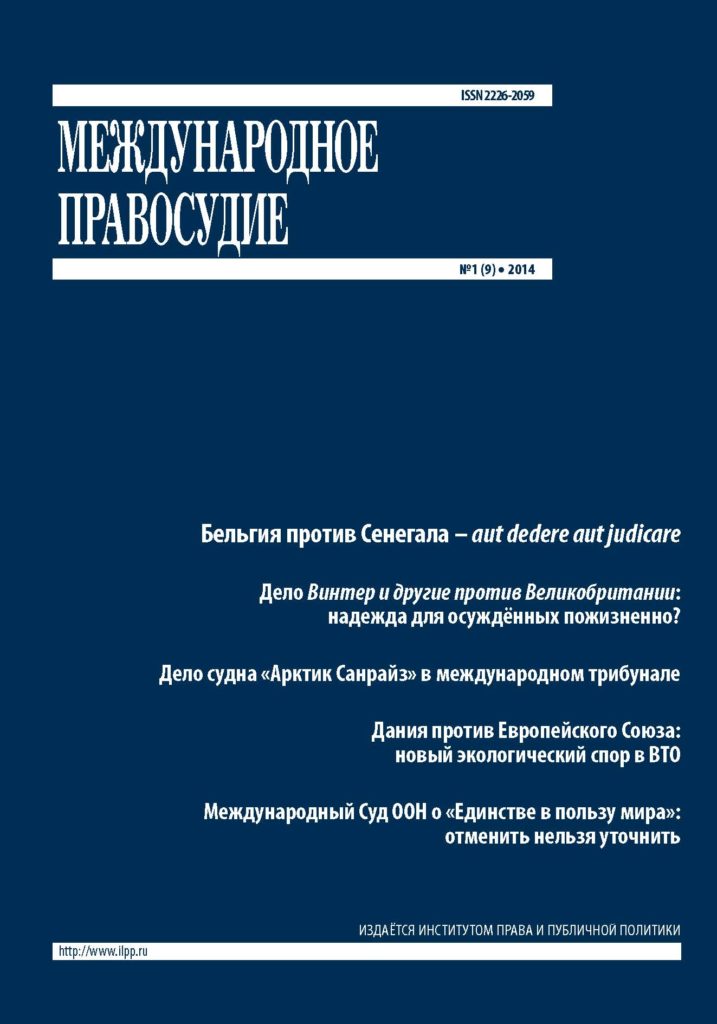 The commentary analyses the proceedings before the International Tribunal for the Law of the Sea in the case of the Dutch ship “Arctic Sunrise”, which was arrested in the exclusive economic zone of the Russian Federation, and the Tribunal’s decision on provisional measures to release the vessel and its crew. For the first time in its history, the Russian Federation boycotted interstate proceedings in the international court. The author addresses the possible consequences of this decision.

Case Commentary: Questions relating to the Obligation to Prosecute or Extradite (Belgium v. Senegal): the Effect of the Judgment of 20 July 2012 of the International Court of Justice

By a decision of 20 July 2012 in the case Belgium v. Senegal the International Court of Justice has ruled on whether Senegal was in violation of its obligations to prosecute or extradite former president Habré of the Republic of Chad under the Convention Against Torture as well as under customary international law. Based on its findings that it has no jurisdiction to entertain the claims of Belgium relating to the alleged breaches by Senegal of its obligations under customary international law and that Belgium has standing as a State party to the Convention Against Torture to bring a claim to the Court, the ICJ decided the case on the merits. By implementing the obligations provided for in the Convention, in the context of achieving the object and purpose of that instrument, the ICJ has concluded that Senegal was in breach of the Convention and that it must without delay submit the case to its competent authorities for the purpose of prosecution, if it does not extradite Mr. Habré.

Case Commentary: Vinter and Others v. the United Kingdom: Hope for Lifers?

This commentary to the judgment by the Grand Chamber of European Court of Human Rights in the case Vinter and others v. the United Kingdom discusses the circumstances of the case and its history at the European Court of Human Rights. Primary attention is paid to the contents of the Grand Chamber judgment, pursuant to which the absence of an effective mechanism of release and possibility of review of the life sentence is a violation of Article 3 of the European Convention of Human Rights, as well as to the practical consequences of the judgment.

Case Commentary: Catan and Others v. Moldova and Russia: Geopolitics and the Right to Education. And Why “No Person” is, in Fact, a Child

The case commentary analyses and subjects to criticism the judgment on 19 October 2012 of the Grand Chamber of the European Court of Human Rights in Catan and Others v Moldova and Russia. The author analyzes the judgment that there had been no violation of Article 2 of Protocol 1 (P1-2, the right to education) of the European Convention on Human Rights by Moldova, but that there had been a violation by Russia.

Russia in the European Court of Human Rights: Some Statistics for 2012-2013

Procedural Law of the International Court of Justice: Сounter-claims (conditions of admissibility)

The UN General Assembly’s Resolution 377(V) “Uniting for Peace” is considered to be either “the last resort” of peace maintenance in case of the UN Security Council’s impotence, or an illegal attempt to redistribute the powers between the Security Council and the General Assembly. The article examines provisions of the resolution and sums up some opinions on it in the scholarship of international law. It analyzes on this basis the attitude of the International Court of Justice towards the “Uniting for Peace” resolution, as revealed in the course of its practice.