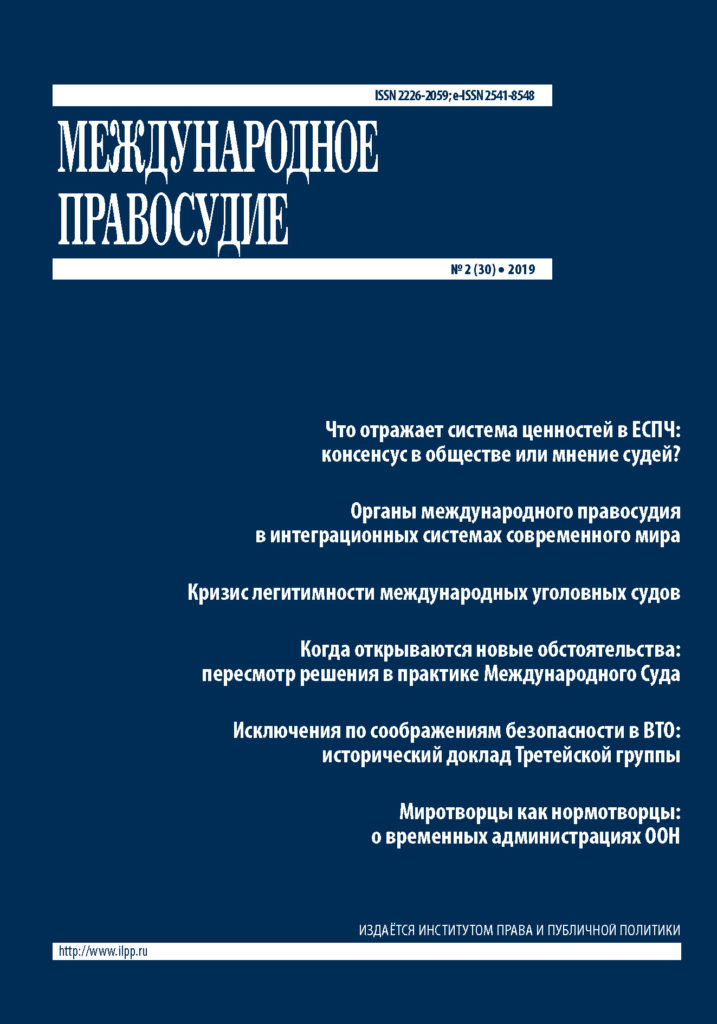 THE EUROPEAN CONVENTION FOR PROTECTION OF HUMAN RIGHTS AND FUNDAMENTAL FREEDOMS – A CONSTITUTION FOR EUROPE?

In the retrospective it is surprising how skeptical the text of the European Convention of Human Rights was seen when it was adopted in 1950. Despite this somewhat difficult start it developed into a comprehensive human rights protection instrument applicable to 47 European States and thus exceeded all expectations. This was due to favorable historical conditions, especially after the end of the Cold War in the 1990s. The Court’s jurisprudence has shown revolutionary tendencies in developing the Convention as a “living instrument” and adapting it to changing conditions, but at the same time granting a varying margin of appreciation to the Member States in specific areas. In many respects the Convention resembles a Constitution.

The article aims at interpreting and analyzing the WTO security exceptions. Provisions of Article XXI(b)(iii) of the GATT relating to a situation emergency in international relations have been applied by a panel for the first time in GATT/WTO history in Russia – Measures Concerning Traffic in Transit case. The landmark decision contains important conclusions regarding the scope of this exception and reviewability of measures adopted thereunder. The article analyzes subjective and objective approaches towards interpretation of the WTO security exception, as well as at the approach of the Panel in Russia – Measures Concerning Traffic in Transit case.

DECISION OF THE INTERNATIONAL ARBITRATION ON THE SOUTH CHINA SEA: A REVIEW OF THE POSITIONS OF CHINESE EXPERTS

The decision of the European Court of Human Rights in the case of Tasev v. North Macedonia considered the complaint of Slavcho Tasev who asked that the authorities’ refusal to change his ethnicity in the electoral roll had violated his right to ethnic identity under Article 8 of the Convention (the right to respect for private life).

This article continues a series of modern theoretical developments in the fieldof legal problems of the integration of states. At the same time, this study proposes to address the current problems of integration from a new perspective and to consider in detail the contribution of international courts to the strengthening of the integration processes. For these purposes the authors generalize and systematize the conceptual apparatus of “integration law”, which is at times contradictory and controversial.

PROCEDURAL LAW OF THE INTERNATIONAL COURT OF JUSTICE: REVISION

The procedure for the revision of the Court’s decision consists of two parts: first, the Court must decide on the admissibility of the request for revision and, secondly, if the answer is in the affirmative, it proceeds to the merits of the request. The jurisdiction of the Court in revision cases is based directly on its Statute and exists in so far as the Court has previously rendered a judgment in regard to a dispute between States. Article 61 of the Statute sets out the conditions for the admissibility of an application for revision, which are cumulative, i. e. if any one of them is not met, the application must be dismissed.

The article starts by looking at existing definitions of this current “backlash” against international courts in the context of “legitimacy crisis”, and proceeds with the examination of states’ relations with international criminal tribunals and the ICC with a view of identifying major points of contention and possible solutions to the crisis as seen from the perspective of both liberal and critical theoretical camps. In the final part of the article we seek to demonstrate that the adoption of a model code of international criminal procedure (or at least, codification of certain rules regulating major problem areas like the rights of the accused and protection of victims and witnesses) might serve to re-create trust in international criminal institutions.

THE UNBEARABLE LOGIC OF THE COURT: COMMENTARY ON THE DECISION OF THE COURT OF THE EAEU DATED OCTOBER 11, 2018 IN THE CASE “OIL MARINE GROUP” (RF) V. COMMISSION

The article is devoted to the analysis of the decision of the Court of the EAEU dated October 11, 2018 in the case “Oil Marine Group” (RF) v. Commission. The plaintiff appealed the Commission’s inaction, expressed in the refusal to monitor the implementation of international treaties and the Commission’s decisions regarding the granting of customs privileges.