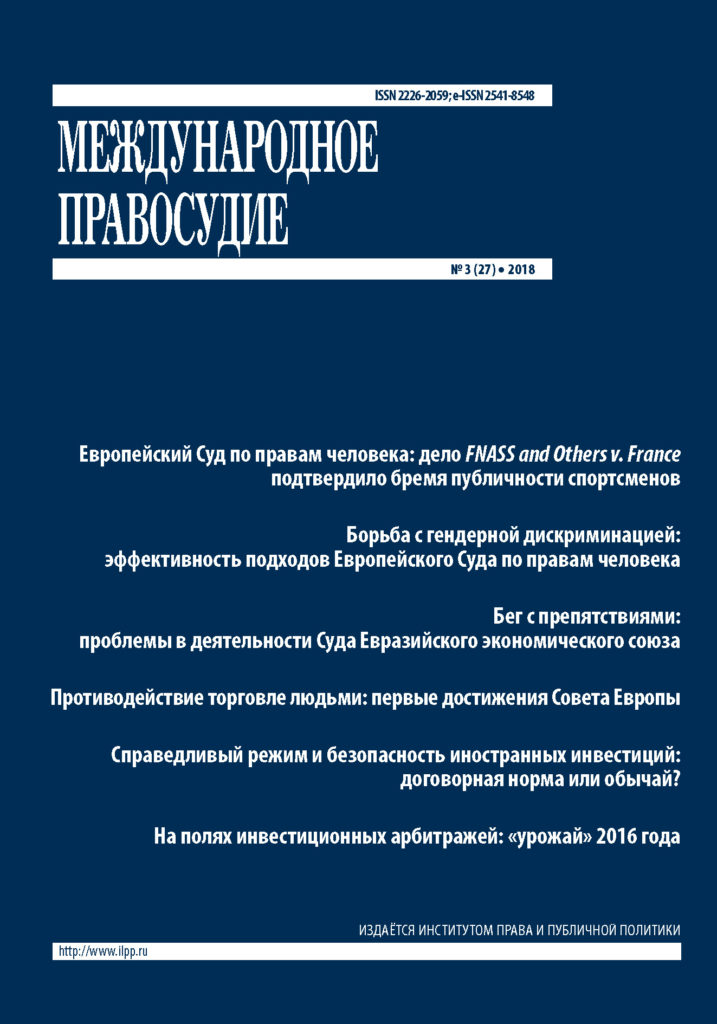 THE ISSUE OF UNREASONABLE CLOSED TRIALS IN THE CASE LAW OF THE EUROPEAN COURT OF HUMAN RIGHTS: CASE COMMENTS TO JUDGMENTS IN CHAUSHEV AND OTHERS V. RUSSIA (25 OCTOBER 2016) AND LAMBIN V. RUSSIA (21 NOVEMBER 2017)

This article provides commentary on two judgements of the European Court of Human Rights on the decision of Russian courts to hold court proceedings in closed regimes. The article considers the factual allegations and shows that the ECtHR has dealt with these issues before. The ECtHR has stated that public and open hearings guarantee public confidence in the courts, and that a public hearing is a condition of a fair trial. Restrictions on publicity and closed trials are allowed only when provided for by law. The closed trial in the case of Chaushev and others v. Russia was not based on any accompanying law, and could have been explained by political motives. The closed trial in the case of Lambina v. Russia also was not based on law, but was explained to be a mistake. The ECtHR recognized that in both situations sec.6, pt.1 of the European Convention on Human Rights was violated. The main conclusion of this article is that the legal proceedings for serious and dangerous crimes require publicity and openness no less than any other legal proceedings. A court’s openness in these situations is one of the factors of trust in justice. In this specific situation, at issue was trust in the court from residences of the Caucasus region (which the ECtHR mentioned in its judgement).

THE CASE OF RUSSIA AND MEASURES AFFECTING THE IMPORTATION OF RAILWAY EQUIPMENT AND PARTS: CHALLENGING EAEU MEASURES IN THE WTO DISPUTE SETTLEMENT BODY

In the judgment in the case of FNASS v. France, the Chamber of European Court of Human Rights considered an issue concerning the requirement for a targeted group of professional sportsmen to inform the authorities of their whereabouts for the purposes of anti-doping tests. The applicants claimed that the authorities’ actions constituted a violation of their right to respect for private and family life and home. They complained of a particularly intrusive anti-doping control system that allowed tests to be carried out every day at their homes or training venues. They noted that this system resulted in long-term interference with their right to a normal family life and a breach of their privacy. The claimant also alleged that her continued renewed registration in a targeted group constituted a repeated violation of her right to the respect for private and family life. The Chamber concluded that the unannounced tests did not violate the Article 8 of the Convention.

GENDER DISCRIMINATION JURISPRUDENCE OF THE EUROPEAN COURT OF HUMAN RIGHTS: SOME AREAS OF CONCERN

The European Court of Human Rights regards gender equality as one of the key principles underlying the European Convention for the Protection of Human Rights and Fundamental Freedoms. At the same time, the jurisprudence of the European Court currently reveals certain approaches that may lead to a denial of protection against discrimination on the basis of sex. Starting from the concept of transformative equality, the author explores such approaches of the Court based on several categories of cases related to the protection from domestic violence, as well as the implementation of social and reproductive rights. On the one hand, the approaches of the European Court in these cases confirm the Court’s attention to the issues of discrimination and protection of women’s rights. On the other hand, a detailed analysis demonstrates that gender discrimination cases imply several risks for applicants. These risks are connected, first, with the Court’s restrictive approach to dealing with cases under Article 14 of the Convention and its limiting the subject of the analysis to violations of the substantive provisions of the Convention.

THE COUNCIL OF EUROPE GUARDING THE RIGHTS OF VICTIMS OF HUMAN TRAFFICKING: LEGAL STANDARDS AND RISK FACTORS

FROM APOLOGY TO APOLOGY: GENERAL PROBLEMS ARISING FROM THE ACTIVITY OF THE EURASIAN ECONOMIC UNION COURT

This article is an overview of political and technical problems arising from the activity of the EAEU Court. The main political problem is the predisposition of the Court in favor of the Commission and the states. It is not a question of bias or other malicious intent, but of the line of conduct chosen by the Court. This line of conduct is considered by the Court as appropriate and conforming to the law, but when placed under scrutiny it is characterized by a certain level of selectivity. Particular manifestations of this problem are the lack of a descriptive part in some decisions, dictated by the Court’s desire to reduce the actual conflict to an abstract issue, and the practice of accepting the withdrawals of the requests for interpretation at the last stages of the process. Among the technical problems are the defects in reasoning (deviations from the rules of formal logic, arbitrary use of methods of interpretation, non-use of modern methods of grammatical interpretation, failure to balance the ascending and descending arguments, and giving excessive weight to the practice of other international courts) and linguistic defects (complex and illiterate formulations, tautologies, etc.).

AWARDS OF INTERNATIONAL INVESTMENT ARBITRATION TRIBUNALS ON COMPETENCE (JURISDICTION) AND ADMISSIBILITY OF CLAIMS: AN OVERVIEW OF THE MOST REMARKABLE CASES FOR 2016

In international investment law, there are no uniform rules. This is true for both the substantive and the procedural law provisions. There is no single body for resolution of investment disputes either. All this makes the application and the interpretation of international investment law extremely difficult. These difficulties entail non-predictability as to which strategy and tactics the claimant or the respondent shall follow in order to get the dispute resolved in his favour. To protect themselves from foreign investors’ claims, the respondent States hosting investments challenge the competence (jurisdiction) of arbitration tribunals and the admissibility of claims. This is due to the following: if the dispute passes from the first stage (jurisdiction and admissibility of claim) into the next one – the merits stage, statistically the respondent State is less likely to win the case. This article analyses specific examples of how States defend themselves from claims of foreign investors by challenging the competence (jurisdiction) of arbitration tribunals and the admissibility of claims. In the beginning, emphasis is put on the distinction between the notions of “jurisdiction” and “admissibility”.

FAIR TREATMENT AND SECURITY OF FOREIGN INVESTMENTS IN INTERNATIONAL LAW