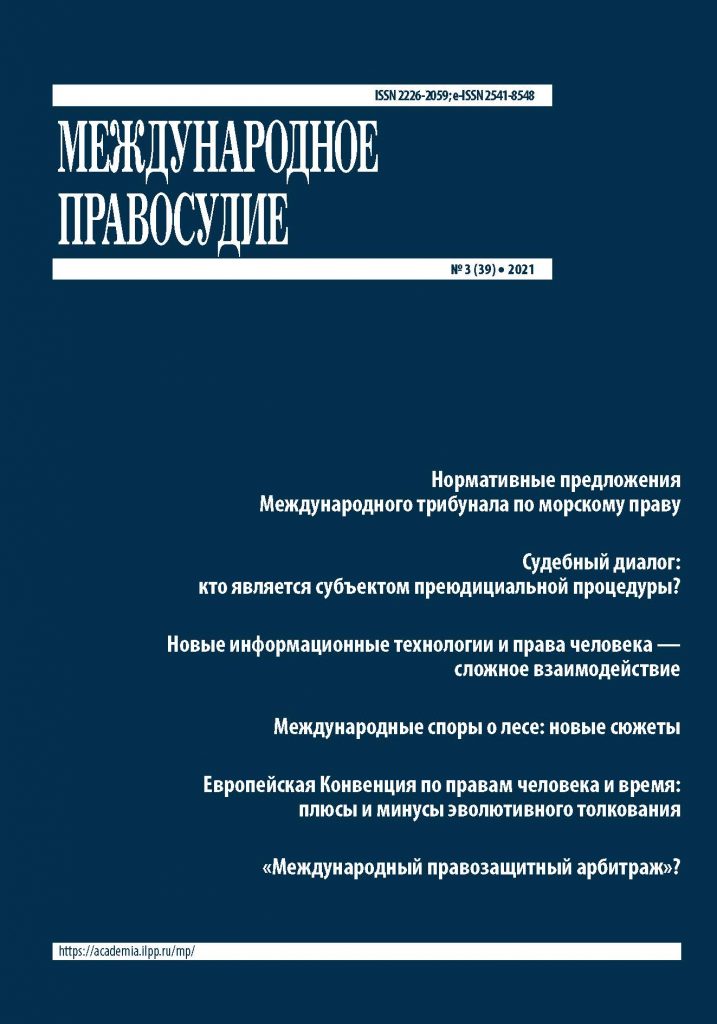 INTER-AMERICAN COURT OF HUMAN RIGHTS: A REVIEW OF PRACTICE FOR 2020

This article presents a grasp of the Inter-American Court of Human Rights’ most important case law of 2020. As is developed within the paper, during 2020, the Court made important developments on Inter-American case-law which will have relevant incidence for the region. Many of the major developments that will be studied in this paper concern the right to nondiscrimination; economic, social and cultural rights; detention conditions, and some important advances on rights protection within the COVID-19 context.

EUROPEAN COURT OF HUMAN RIGHTS: REVIEW OF THE GRAND CHAMBER JUDGMENT OF 16 FEBRUARY 2021 IN THE CASE OF HANAN V. GERMANY (APPLICATION NO. 4871/16)

In X and Others v. Bulgaria, the European Court of Human Rights analysed the procedural obligation under Article 3 of the Convention to investigate cases where children may have been victims of sexual abuse. The Court reiterated that this obligation needs to pursue an obvious line of inquiry. The Grand Chamber also decided that in such cases, the requirement to conduct an effective investigation must be interpreted in light of obligations that arise from other applicable international instruments, and more specifically, the Lanzarote Convention. In this regard, the procedural obligation under Article 3 of the Convention may include inter alia an obligation for the investigating authorities to cooperate with the authorities of another State, as well as a necessity to conduct investigative measures of a more covert nature. However, the Bulgarian authorities neglected to pursue certain lines of enquiry in the applicants’ case. In particular, they failed to use international cooperation mechanisms and did not carry out numerous investigative measures, including covert measures. According to the Court, the Bulgarian authorities did not take all reasonable measures to shed light on the facts of the case and did not undertake a full and careful analysis of the evidence provided. Consequently, the Court concluded that there had been a violation of procedural limb of Article 3 of the Convention.

THE EUROPEAN COURT OF HUMAN RIGHTS IN SEARCH OF LOST TIME: AN EVOLUTIONARY INTERPRETATION

Time is central to the case law of the European Court of Human Rights. By monitoring the effectiveness of the Convention’s system, the European Court of Human Rights (ECHR) tries to maintain relevancy and respond to new challenges. The author notes that the evolutionary interpretation is a method that provides the ECHR with the necessary degree of flexibility to ensure that the implementation of the rights is guaranteed by the Convention. Throughout this comparative analysis, the author emphasises that due to the peculiarities and differences in the legal culture of the respondent States, it is can be extremely difficult for the Court to promote a progressive interpretation of the Convention’s rules, even if it is consistent with the objectives of the Convention. In this regard, the Court’s decision in the Tyrer case is the embodiment of the philosophy of the living instrument. However, the Court presented a model of evolutionary interpretation and failed to immediately demonstrate how it works and will work in the future, which gave rise to a significant part of the criticism. As part of the critical views’ analysis on the application of the ECHR’s evolutionary interpretation, the author highlights that one way to overcome the subjective factor in evolutionary interpretation is the European consensus. This allows the Court to base its decisions on the “common denominator”, that is, not on the judges’ personal preferences, but on the existing consensus among the member States on any given issue. Considering this from a dialogical approach, the author proposes to consider consensus as a form of dialogue that flows from Member States to the Court on the question of what they believe should be the proper settlement of convention rights. The analysis of the application of the evolutionary method’s interpretation by other international courts is carried out, thus proving that the evolutionary interpretation is not merely a figment of the Strasbourg Court’s imagination and nor is it the result of judicial activism, but instead it is the consequence of today’s necessity. The author emphasises that a static understanding of rights and freedoms cannot guarantee the effectiveness of any system of international justice. The textual interpretation of the Convention is blind to contemporary developments and unjustifiably ignores the changed nature of human rights in the twenty-first century. On a practical level, it is likely that politically sensitive decisions will continue to provoke internal criticism. In the final part of the article, the author draws an analogy with Proust’s In Search of Lost Time, noting that the evolutionary interpretation is a kind of formula for the search for time, which simultaneously combines both the past and the present, and is a necessary formula for maintaining the effectiveness and relevance of the conventional system.

CONCEPT OF A COURT OR TRIBUNAL UNDER THE REFERENCE FOR A PRELIMINARY RULING: THE COURT OF JUSTICE OF THE EUROPEAN UNION PRACTICE

UNTAPPING THE POTENTIAL OF PREFERENTIAL TRADE AGREEMENTS TO PROMOTE FOREST PROTECTION: A COMPARISON ON FOREST-RELATED PROVISIONS AND THEIR ENFORCEMENT IN THE US AND EU PTAS

The EU and the US are the actors with the highest number of environmental provisions in their Preferential Trade Agreements. Since 1999, specific rules on forest governance and Sustainable Forest Management have been incorporated in their PTAs. The implementation of such forest-related provisions in PTAs is mostly linked to cooperation among the Parties. However, in cases of noncompliance, PTAs provide for bilateral consultations, the application of the general dispute settlement mechanism, and even trade sanctions. The enforcement approaches differ in the US and the EU PTAs. This study focuses on the question of the potential of PTAs to contribute to forest governance and SFM and analyses the disputes that arose so far. It shows how forest issues may play a key role in negotiating and implementing PTAs, promoting compliance of Multilateral Environmental Agreements, and promoting public participation in environmental matters. The paper concludes that PTAs provide further options to develop and implement International Forest Law beyond the Multilateral Environmental Agreements.

FREEDOM OF EXPRESSION AND RESPECT FOR PRIVATE LIFE IN THE CONTEXT OF THE DEVELOPMENT OF NEW INFORMATION TECHNOLOGIES: JUDICIAL PRACTICE OF THE ECHR AND NATIONAL COURTS

This article examines and summarises judicial practice in cases related to the use of new information technologies. The study primarily focuses upon the decisions of Russian courts (general jurisdiction and arbitration) and the European Court of Human Rights (ECHR). Employing ECHR practice, the author also refers to numerous decisions by courts in Hungary and the United Kingdom. Cases related to the use of new information technologies can be distinguished between, and this article examines the judicial practice of three categories of cases: 1) blocking of internet resources; 2) employers’ control over employees’ electronic correspondence; 3) journalists’ use of hyperlinks in author’s texts and their responsibility of such placements. Within each category of cases, the rights of citizens can be seriously violated. The article highlights that in an era of rapid development of new information technologies, states, represented by special services and authorised state bodies, are making unprecedented efforts to ensure that they maintain at least partial control over the activities of new actors (bloggers, Internet media, Internet platforms, etc.). Similarly, courts often compromise with authorities when resolving such issues. Notably, national Russian courts did not consider parties’ interests, nor did they assess the need to block all sites with a particular IP address. They did not even follow the Supreme Court of the Russian Federation’s decision to apply the requirements of the European Convention on Human Rights within the framework of the ECHR. The courts limited themselves to pointing out that Roskomnadzor acted within its power. Thus, the decisions of the national courts did not offer a mechanism for protecting rights. Within the norms regulating the new sphere of relations, there are often norms of a restrictive and prohibitive nature, and these norms are dominant in the Russian Federation. In this regard, there remains grounds for concern among lawyers involved in the protection of rights related to new information technologies.

COMPULSORY JURISDICTION UNDER THE LAW OF THE SEA CONVENTION: ITS ACHIEVEMENTS AND LIMITS