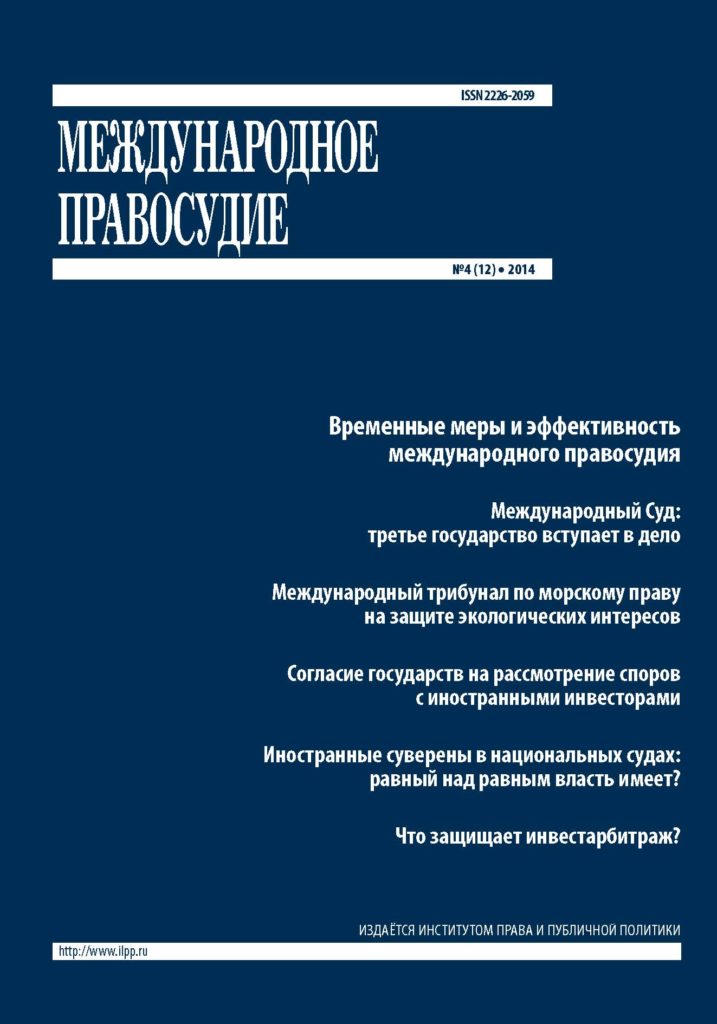 INTERIM MEASURES IN THE PRACTICE OF INTERNATIONAL TRIBUNALS: EDITORIUM

The author gives an overview of the origin and scope of application in respect of interim measures issued by the European Court of Human Rights under Rule 39 of its Rules of Court.

VIOLATIONS OF ARTICLE 34 ON ACCOUNT OF NON-COMPLIANCE WITH INTERIM MEASURES: EXECUTION OF THE ECtHR JUDGMENTS

Although in the majority of the member States of the Council of Europe incidents of non-compliance with interim measures indicated by the Court have remained isolated and have not required any far-reaching execution measures, execution of the Court’s judgments in two groups of cases of this nature has presented certain difficulties.

The article is focused on the analysis of the European Court of Human Rights practice on the application of the interim measures under the Rule 39 of the Rules of Court, and the problems of execution of such decisions.

INTERIM MEASURES IN INTER-STATE CASES: A THREAT OR AN OPPORTUNITY?

PROVISIONAL MEASURES IN SITUATIONS OF ARMED CONFLICT: THE PRACTICE OF THE INTERNATIONAL COURT OF JUSTICE

Provisional measures indicated by the ICJ can aim to preserve the integrity of the disputed rights but also to avoid an escalation of the underlying conflict. This ambiguity is particularly marked in disputes turning on an armed conflict. Interim measures in similar cases can serve, alternatively, the better administration of justice or peacebuilding goals.

The ICC is still in its second decade, explored here is an outline of its structure, formation and procedures.

Intervention under Articles 62 and 63 of the Statute of the International Court of Justice is an incidental proceeding which arises out of the main proceeding between States before the Court. Intervention pursuant to Article 62 is possible only if the decision in the case may affect an interest of a legal nature of a State.

The article examines the jurisprudence of the International Tribunal for the Law of the Sea relating to disputes which involve both international environmental and international economic relations.

THE MEANING OF "INVESTMENT" IN BILATERAL AND MULTILATERAL INVESTMENT PROTECTION AGREEMENTS: IS IT CORRECTLY DEFINED?

The article addressed various issues related to the definition of the term ‘investment’ in the bilateral and multilateral investment treaties. The author discusses possible approaches to interpretation of definitions from each of the groups.

The article deals with the question in which cases the state hosting foreign investments gave its consent to the resolution of its disputes with foreign investors by international arbitration tribunals.

EVOLUTION OF JURISDICTIONAL IMMUNITIES OF STATES: DOES EQUAL HAVE POWER OVER AN EQUAL?

The article is dedicated to development of norms concerning jurisdictional immunities of states and their property in modern international law influenced by human rights doctrine, fight against terrorism, obligation to ensure everyone’s right to court, protection of labor, civil and commercial rights of private parties.