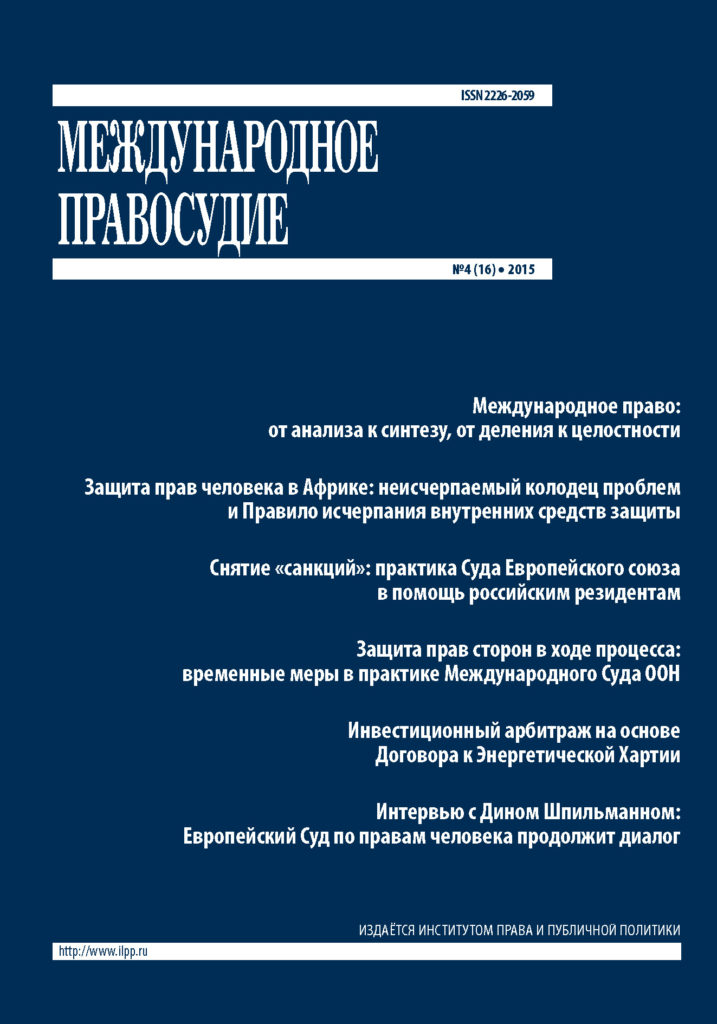 THE EUROPEAN COURT OF HUMAN RIGHTS' DECISION ON A NEW APPEAL IN CIVIL PROCEEDINGS –A NEW COURT LOOK AT OLD ISSUES?

Case commentary on the judgment of the ECHR Abramyan and Yakubovskiy v. Russia in respect to the exhaustion of domestic remedies After the reformation of the Russian Code of Civil Procedure in 2012, the European Court had to examine the new cassation procedure introduced by the reform as a remedy to be exhausted by the applicants before bringing their cases to the Court. In its decision in the case Abramyan and Yakubovskiye v. Russia the ECHR departed from its previous approach to some elements of case revision in Russian civil procedure. In this article the author analyses the reasons for this. The article also contains a historical overview of the requirement to exhaust domestic remedies and describes the reasons why this requirement appeared in the text of the European Convention.

This article analyzes the resolution by the International Court of Justice of the long dispute between Cambodia and Thailand about ownership of the temple of Preah Vihear and areas in its vicinity. Uncertainty in this matter had resulted in armed clashes between the two States.

This review presents an advisory opinion and nine cases decided by the Inter-American Court of Human Rights in the second semester of 2014. The objective is to introduce some ideas to contextualize the contribution of inter-American jurisprudence on certain issues and their possible use in other regional systems for the protection of rights. These issues include extra-judicial executions and the rights of non-legal immigrants – their children in particular – in conditions of detention. The review focuses mainly in aspects of the decisions that represent a new interpretation of the American Convention on Human Rights.

Power to indicate provisional measures to preserve the rights of parties to a dispute pending a court’s decision constitutes an integral part of the competence of international judicial bodies. The purpose of these provisional measures, which are binding, is to protect parties’ rights and to prevent actions that could prejudice the subject-matter of a dispute to such an extent that the eventual decision of the International Court of Justice, whatever its substance might be, would be deprived of meaning. Provisional measures may be indicated only if the Court has prima facie jurisdiction.

CONTINENTAL SHELF BEYOND 200 MILES: DETERMINATION OF THE OUTER LIMITS AND DELIMITATION (PART 2)

This Article stipulates that recommendations of the Commission are a mandatory precondition which must be complied with for these limits to be legally valid. Both the State practice and the case law of international dispute resolution bodies examined in the present article demonstrate that the delimitation of the continental shelf beyond 200 nautical miles by an international court or arbitral tribunal is possible only if this delimitation does not prejudice the Commission’s functions nor ignore its role in the determination of the outer limits of such a continental shelf.

The practice of application and interpretation of the rule of exhaustion of local remedies by the African monitoring bodies in the field of human rights, in particular by the African Commission on Human and Peoples' Rights, not only complies with approaches elaborated by other international judicial and quasi-judicial human rights bodies, but also develops them to a considerable extent. Following other international institutions the monitoring bodies of the African human rights system have established that they cannot be regarded as courts of the first instance, the mechanism of international control is subsidiary with respect to national one, and the application of the requirement of exhaustion of internal procedures shall not be carried out using formal rules.

The author advances the discussion of the legal nature of so-called sanctions in E.U. law and suggests possible grounds for lifting these from Russian physical persons.

The article examines the issues of the settlement of international investment disputes under the Energy Charter Treaty. A brief introduction to the Treaty is given. The provisions of the Treaty, and primarily its Article 26, as well as the relevant practice of the for a constituted under the Treaty (International Centre for Settlement of Investment Disputes (ICSID); Arbitration Institute of the Stockholm Chamber of Commerce; Arbitration ad hoc under the UNCITRAL Arbitration Rules), related to the subject matter of the article, are analyzed.