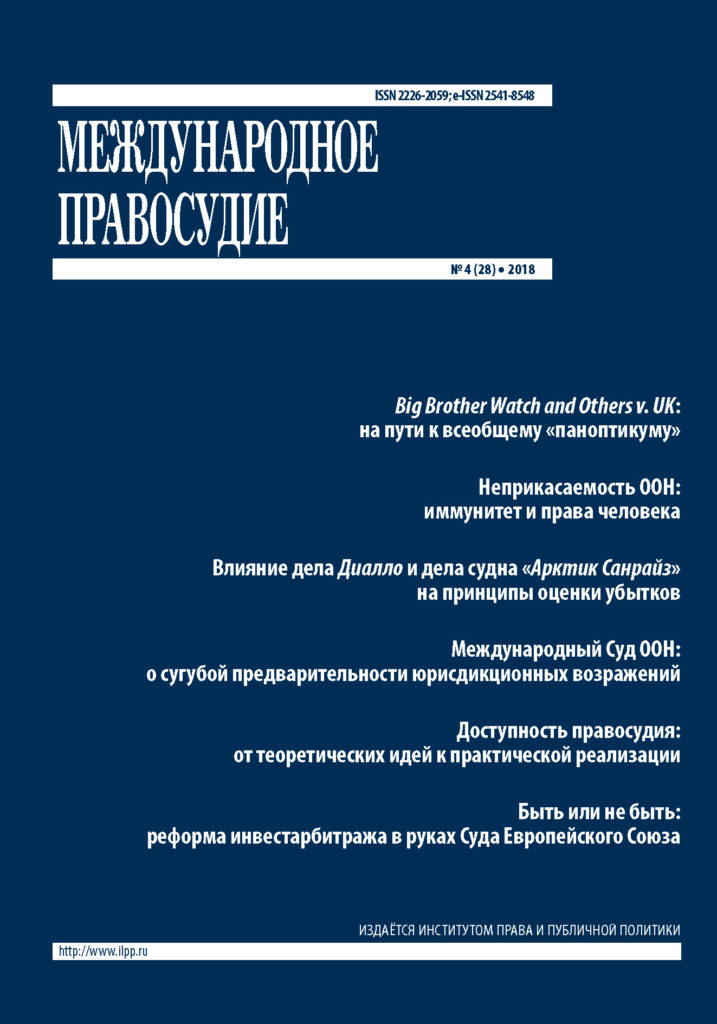 LEGALIZATION OF “MASS SURVEILLANCE” BY THE EUROPEAN COURT OF HUMAN RIGHTS: WHAT STANDS BEHIND THE JUDGMENT IN THE CASE OF BIG BROTHER WATCH AND OTHERS V. THE UNITED KINGDOM?

On September 13, 2018, the European Court of Human Rights rendered a judgment in the case of Big Brother Watch and Others v. the United Kingdom, in which it examined whether the legal acts of the UK on the mass interception of communications and its meta-data, as well as the intelligence sharing regime with foreign intelligence agencies, corresponds to the Convention on the Protection of Human Rights and Fundamental Freedoms. Having used an approach under which “while States enjoy a wide margin of appreciation in deciding what type of interception regime is necessary to protect national security, the discretion afforded to them in operating an interception regime must necessarily be narrower,” the Court thereby legalized the use of bulk interception of communications and meta-data.

EUROPEAN COURT OF HUMAN RIGHTS: REVIEW OF THE GRAND CHAMBER JUDGMENT OF 25 SEPTEMBER 2018 IN THE CASE OF DENISOV V. UKRAINE (APPLICATION NO. 76639/11)

The decision of the European Court of Human Rights in the case of Denisov v. Ukraine considered the complaint of Anatoly Denisov who asked that his removal from the office of president of the Kyiv Administrative Court of Appeal be deemed a violation of Article 6 (the right to a fair trial) and Article 8 (the right to privacy) of the Convention. The Court once again confirmed its prevailing point of view, which was first formulated in the case of Vilho Eskelinen and Others v. Finland on whether the labor disputes of civil servants, including judges, fall under the civil limb of Article 6 of the Convention.

In the judgment in the case of Mutu and Pechstein v. Switzerland, the Chamber of European Court of Human Rights considered an issue concerning the lawfulness of proceedings brought by professional athletes before the CAS. Relying on Article 6 § 1 of the Convention, the applicants submitted that the CAS could not be regarded as an independent and impartial tribunal. The second applicant complained that she had not had a public hearing before the ISU disciplinary board, the CAS or the Swiss Federal Supreme Court, despite her requests.

SREBRENICA, HAITI, WHAT IS NEXT? THE FUTURE OF THE DISPUTE SETTLEMENT FOR PRIVATE LAW CLAIMS BROUGHT AGAINST THE UNITED NATIONS

The right to a fair trial is a fundamental human right. Compliance with this right is monitored at both the national and international level. In this regard, international organisations play a special role. However, as activities of such organisations expand, disputes to which they are parties arise more often.

INTRODUCTORY TO DECLARATION OF SAN JOSE

THE ROLE OF EQUITY IN THE ASSESSMENT OF DAMAGES UNDER CUSTOM: WHERE ARE DIALLO AND THE ARCTIC SUNRISE TAKING THE LAW?

This article discusses the trends in the use of equity by international courts and tribunals at the stage of assessing pecuniary damages under the standards of customary international law. The research presented in the article is based on the jurisprudence of the International Court of Justice, International Tribunal for the Law of the Sea, regional human rights courts, the Iran-US Claims Tribunal, Annex VII arbitral tribunals, investment arbitration tribunals, and other bodies.

JURISDICTIONAL OBJECTIONS OF AN EXCLUSIVELY PRELIMINARY CHARACTER: A COMMENTARY UPON CERTAIN CONCLUSIONS MADE BY THE INTERNATIONAL COURT OF JUSTICE IN IMMUNITIES AND CRIMINAL PROCEEDINGS

This article examines the judgment on preliminary objections delivered by the International Court of Justice in an Immunities and Criminal Proceedings dispute between Equatorial Guinea and France and scrutinizes the preliminary objection that was employed by France to deny the alleged over-extension of its national criminal jurisdiction with respect to offences criminalized thereby in conformity with the 2000 United Nations Convention against Transnational Organized Crime (Palermo Convention). The analysis of the previous case-law of the I.C.J. and the Permanent Court of International Justice allows one to presume the existence of a test helping the Court to reveal whether a particular preliminary objection has an exclusively preliminary character or not.

The problem of access to justice continues to be relevant both in the practice of the European Court of Human Rights and at the level of national legal regulation. The purpose of this article is to systematize the accumulated theoretical ideas about access to justice and analyze their practical implementation by the ECHR. The study begins with a historical overview of views on access to justice.

INVESTMENT ARBITRATION REFORM IN THE EYES OF THE EUROPEAN UNION: PROBLEMS AND PERSPECTIVES

The author suggests that the existing model of dispute resolution between foreign investors and host states finds itself in a deep crisis and needs to be substantially reformed. Over the past years, several options for such reform have been suggested by academics, practitioners, and states. Such options include the establishment of a permanent appellate authority or a specialized international investment court, as well as unilateral actions by states regarding revision of existing investment protection agreements and restrictive approach to concluding new ones. Given that all parties to this discussion pursue their own interests, it may be difficult to come to any universally accepted multilateral solution on the future of investment arbitration. The impetus to the new wave of discussion about the reform of investment arbitration had been given by the release of a European Commission Concept paper, proposing the creation of a permanent investment court instead of ad hoc arbitration and, accordingly, the replacement of arbitrators with judges.

In this article, the authors analyze emerging approaches of Russian courts (the Constitutional Court of the Russian Federation, commercial courts, and courts of general jurisdiction) for resolving disputes connected with economic sanctions imposed against Russia in 2014, as well as the legal qualification of relevant legal issues. The Russian courts take a clear stand that these economic sanctions are unlawful from the standpoint of international law.