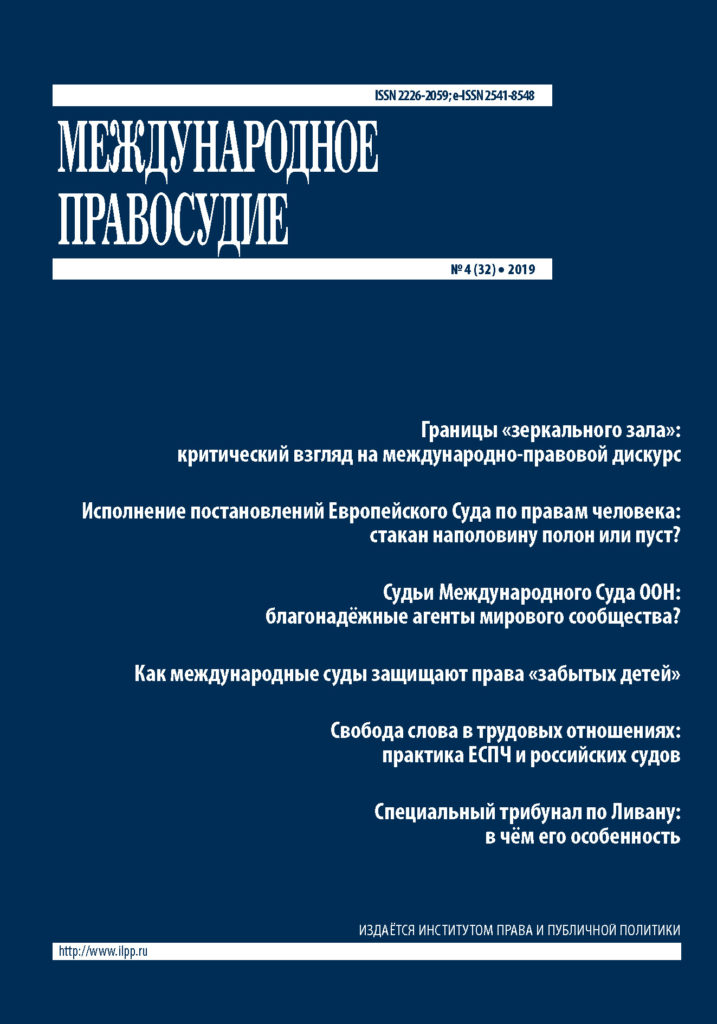 EUROPEAN COURT OF HUMAN RIGHTS: REVIEW OF THE GRAND CHAMBER JUDGMENT OF 10 SEPTEMBER 2019 IN THE CASE OF STRAND LOBBEN AND OTHERS V. NORWAY (APPLICATION NO. 37283/13)

EUROPEAN COURT OF HUMAN RIGHTS: REVIEW OF THE DECISION OF 12 NOVEMBER 2019 (SECTION II) IN THE CASE OF ZEVNIK AND OTHERS V. SLOVENIA (APPLICATION NO. 54893/18)

THREE INTERNATIONAL LAWYERS IN A HALL OF MIRRORS

ON THE PARTIAL ENFORCEMENT OF THE JUDGMENTS OF THE EUROPEAN COURT OF HUMAN RIGHTS: THE CASE OF KIM AND OTHERS V. RUSSIA AND ANCHUGOV AND OTHERS V.RUSSIA

THE RIGHT OF CHILDREN OF IMPRISONED PARENTS TO VISIT THEM:  INTERNATIONAL AND RUSSIAN CONTEXTS

Children of imprisoned persons were not considered a vulnerable group with specific needs and interests until recently. During last several years, however, international bodies adopted documents that provided for rights of these children that should be particularly noted by governments, including the right to maintain the contact with the imprisoned parent. Presently this right is interpreted as a separate right of the child and not only as a right of an imprisoned parent both on a global level by the UN Committee on the rights of the child and on the regional level by the Council of Europe Committee of Ministers.

THE BOUNDARIES OF FREEDOM OF EXPRESSION IN LABOR RELATIONS: RUSSIAN PRACTICE IN THE CONTEXT OF DECISIONS OF THE EUROPEAN COURT OF HUMAN RIGHTS

UNIQUE LEGAL FEATURES OF THE SPECIAL TRIBUNAL FOR LEBANON

This article is dedicated to the unique features of the Special Tribunal for Lebanon, which is the first international court prosecuting terrorism in times of peace and the only one dealing with the Middle East. The author introduces the establishment of the Tribunal by the Security Council under the Chapter 7 of the United Nations Charter and its specific mandate over persons responsible for the attack of 14 February 2014 resulting in death the former Lebanese Prime Minister Rafiq Hariri, death of 21 people and injury to a further 226.

AWARDS OF INTERNATIONAL INVESTMENT ARBITRATION TRIBUNALS ON COMPETENCE (JURISDICTION) AND ADMISSIBILITY OF CLAIMS: AN OVERVIEW OF THE MOST REMARKABLE CASES FOR 2017–2018

The specificity of the international investment law (IIL) is that it is not based on a single source in which the norms which constitute its nucleus would be codified and progressively developed. This is true for both substantive and procedural parts of the IIL. There exists no international organiza- tion or body to settle investment disputes that would facilitate a uniform application and interpretation of IIL rules. Therefore, it is difficult (or even impossible) to predict how an arbitration tribunal would decide the one or the other dispute between a foreign investor and the host state. This en- tails a legal uncertainty which impedes the IIL to perform the main function of the law – to create certainty and predictability in the relations the law regulates. The analysis of the awards rendered by arbitration tribunals allows forecasting to some extent. The author examines the specific examples of how States seek to shield themselves against the claims brought forward by foreign investors through challenging the jurisdiction of the arbitration tribunals and/or admissibility of claims through the notions of foreign investor and foreign investment; lawfulness of foreign investment as a precondition for admissibility; scope of the jurisdiction and other notions.

WHEN POLITICS PREVAILS OVER THE SCIENCE

The subject of this review is the translation of the Serbian textbook on international criminal law. The authors of the review found that the textbook in question can be regarded as a low-quality text for the following reasons: the superficial content of the book along with extremely controversial statements, the presence of numerous juridical and factual errors, and the lack of reliable references to sources.