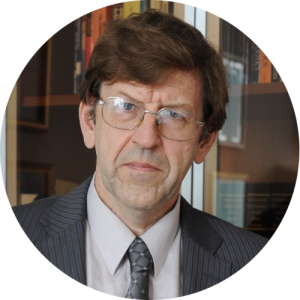 Doctor of Sciences (Philosophy), Professor (1995), Tenured Professor (since 2009) at the National Research University Higher School of Economics (Faculty of Social Sciences, Department of Political Sciences) in Moscow, where he teaches Legal Philosophy, Comparative Constitutional Law and Political Science. His areas of expertise are: legal philosophy, ethics, ideologies, comparative constitutionalism, political institutions, Russian political process. Professor Medushevsky is the Senior Expert of the International Institute of Law and Public Policy, the author of 20 books and more than 500 articles in Russian and international learned journals.

Doctor of Science in Law, Professor, Senior Research Fellow at the Institute of State and Law of Russian Academy of Sciences, Director of the Center for Comparative Law at the faculty of law of the National Research University – Higher School of Economics, the chief editor of the State and Law Journal, the chief editor of the Juvenile Justice Journal, the Chairman of the editorial board of the State authority and local governments Journal. Member of the UN Committee on the Elimination of Racial Discrimination. The head of a group of Russian experts to prepare a draft of the Constitutional Act of the Union State of Belarus and Russia. Member of the advisory boards of several committees of the State Duma and the Federation Council of the Federal Assembly of Russia. Author of more than 200 publications.

Doctor of Law, Professor of Public Law at European Humanities University in Vilnius, Lithuania and Visiting Professor at the Regional Master’s Program in Human Rights and Democratization in the Caucasus. Former Justice of the Constitutional Court of Belarus. From 2006  Professor Vashkevich  is a  member of  the OSCE Panel of Experts on Freedom of  Assembly and Association. Research interests include  problems of constitutional  law and international human rights law. Author of more than 130 publications.

Professor at the University of Saint-Petersburg on the Law Faculty, Department of State and Administrative Law. She is graduated in jurisprudences (Diploma of layer). She has a Diploma of Ph.D. and a Doctor of Law Diploma on the specialization “constitutional law; municipal law”. Mrs. Gritsenko has been working as a university-teacher of the state law and the administrative law since 1987.  She has got experience of work in public service as a chief of Department of State and Municipal Law on the State Institute of the regional legislation of administration of Irkutsk region in 1994-2002, as an adviser of Vice-Chairman of the Constitutional Court of Saint-Petersburg in 2004-2005. She has published a monograph on comparative-legal aspects of local self-government in system of public government of the federative state (on an example of Germany and Russia) that is especially known among the scientific public. She has a total of printed sheets of scientific and methodical works on the problems of legal and political aspects of the state structure, federalism and local government, of comparative jurisprudence, of public law in Germany, Russia and other countries about 150. She has a thorough knowledge on Russia and Germany and on working as a consultant for TACIS, GTZ, DAAD and for the state and municipal authorities (RF Council of Federation etc) in Russia. Mrs. Gritsenko has a very good command of the German language and the knowledge of the English language in volume of the upper intermediate (FCE-Examination) level.

Associate Professor of Constitutional Law at St. Petersburg State University (Russia), candidate of Legal Science (Ph.D in Law). Since 2011, he has been participating in the drafting of hypotheticals for the Moot Court Competition on Constitutional Justice Crystal Themis for students’ teams of law schools, being an expert of the Competition. Since 2016, he is a member of the Federal Curriculum association on jurisprudence under the Ministry of Science and Education of Russia. His field of expertise is constitutional adjudication, constitutional rights, international law, legal education.

Doctor of Legal Sciences, Professor, Head of Centre of Foreign Legislation and Comparative Law (ILCL). Research interests: international and European Human Rights law, comparative constitutional law, anthropology, and ethnology law. Anatoly Kovler is a former judge of the European Court of Human Rights (1999-2012). He was the head of the Center for Comparative Law at the Institute of State and Law of Russian Academy of Science (1995-1999) and an expert of the Constitutional Council on the Constitution of the Russian Federation Draft (1993). He participated in the development of the electoral law and the law on political parties (1992-1994). He held the positions of an expert of Bosnia Peace Talks at Dayton (1995) and an independent expert on preparation of Russia joining the Council of Europe (1996-1998). He was teaching at Russian, Eastern and Western European, American and Asian universities. He is the author of more than 200 scientific publications and several books, including “The Historical Form of Democracy: the Problems of Political and Legal Theory” (1991), “Anthropology of Law” (2002). Anatoly Kovler is the Chairman of International Justice Journal Editorial Board, member of the editorial boards of “Human Rights. Practice of the European Court of Human Rights”, “Law and Culture (“Droit et Cultures”) (Paris), “International Journal of Constitutional Law” (Washington, DC) and other journals. He is the corresponding member of the International Academy of Comparative Law and a member of the International Association of Anthropology of Law, a member of the Italian Society of Elections Research and member of other scientific societies, substitute member of the Venise Commission

Head of the Constitutional and Municipal Law Department of the National Research University – Higher School of Economics (HSE), Doctor of Science in Law, Tenured Professor of HSE. Research interests: theory of the state, the structure of public administration, human rights, moral foundations of modern law, the principles of the Christian state, the theory of legal liability. In 1995-1998 advised to president of Russian Federation on legal issues. Led the working group to develop the concept of administrative reform in the Presidential Administration, as well as on the development of the reform program of government at the Centre for Strategic Research. Vice-President of the research non-governmental Foundation “INDEM.” Has more than 150 scientific and practical publications, totaling more than 360 pages. Actively served as a science publicist (about 190 publications in the public press). Among the main books of recent years: “Personalist regime in Russia (the experience of institutional analysis)” and “The Russian system of government: a triangle with one corner” (co-authored with I.G.Shablinsky).

Professor of the Kutafin Moscow State Law University s, deputy director for scientific work). Associate member of the International Academy of Comparative Law (Paris, France), PhD in law. 1988 – 2015: Institute of Legislation and Comparative Law under the Russian Federation Government (senior research fellow, head of the department of constitutional and administrative law of foreign states, deputy director for scientific work). 2014 – 2015: Evaluator of the Group of States Against Corruption. 2013 – till present: Substitute member of the European Commission for Democracy Through Law (Venice Commission of the Council of Europe). 2014 – till present: Member of the International Academic Advisory Board and visiting professor of the International Anti-Corruption Academy (Laxenburg, Austria). Author of more than 250 scientific works on comparative jurisprudence, general issues of the theory of state and law, constitutional law of Russia and foreign states, constitutional economics, election law. Author of 38 monographic works.

Professor of Law at New York University School of Law (USA), Faculty Adviser at the Center on Law and Security of New York University School of Law, a current member of American Academy of Arts and Sciences. After receiving his PhD from Yale in 1976, he taught briefly at Yale and Wesleyan universities before becoming a member of the Institute for Advanced Study at Princeton University in 1978. Later he taught at Harvard University, the University of Chicago, and Princeton before joining the faculty at NYU School of Law in 2000. From 1992 to 2003 was the chief editor of East European Constitutional Review”.

Professor at Central European University (Budapest),  Vice-President of the European Court of Human Rights (since November 2015), Global Visiting Professor of Law at New York University Law School, member of the American Law Institute (1997) and the Hungarian Academy of Sciences (1995). He participated and/or advised in drafting the Ukrainian, Georgian, and South African constitutions. He also was the principal draftsman of the Environment Code for the Hungarian Parliament (1991-1992), as well as the founder and speaker of the Hungarian League for the Abolition of the Death Penalty. He has also served as Deputy Chair of the National Deregulation Board of Hungary. The sphere of research interests includes human rights, philosophy of law, international and comparative environmental law, sociology of law and comparative constitutional law. Among a number of publications could be mentioned his book “Limiting Government. An Introduction to Constitutionalism” (2001 in Russian), “Comparative Constitutionalism: Cases and Files” (coauthors – N. Dorsen, M. Rosenfeld and S. Bayer, 2003 in English).